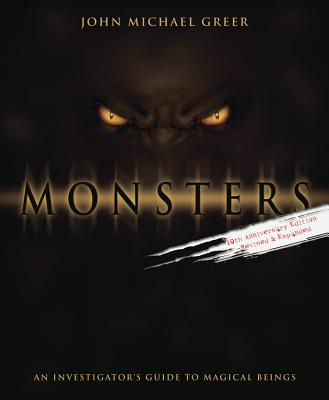 Of course that monster hiding under your bed when you were little didn't really exist. Vampires, werewolves, zombies, demons--they're simply figments of our imagination, right? After all, their existence has never been scientifically proven. But there is one giant problem with such an easy dismissal of these creepy creatures: people keep encountering them.

Join occult scholar John Michael Greer for a harrowing journey into the reality of the impossible. Combining folklore, Western magical philosophy, and actual field experience, Monsters: An Investigator's Guide to Magical Beings is required reading for both active and armchair monster hunters. Between these covers you'll find a chilling collection of fiendish facts and folklore, including:

This 10th anniversary edition of the quintessential guide to magical beings features a new preface, new chapters on chimeras and zombies, and updates on werewolves, dragons, and the fae.

One of the most respected writers and teachers in the occult field today, John Michael Greer has written more than fifty books on esoteric traditions, nature spirituality, and the future of industrial society. An initiate in Druidic, Hermetic, and Masonic lineages, he served for twelve years as Grand Archdruid of the Ancient Order of Druids in America (AODA). He lives in Rhode Island, USA with his wife Sara. He can be found online at www.EcoSophia.net.