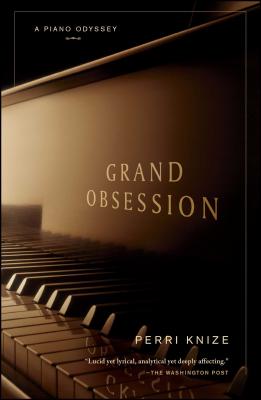 
We can usually get this book in 3 to 7 days, except during a pandemic. We are doing our best
Now available in paperback, the critically acclaimed, “lyrical, analytical, yet deeply affecting” (The Washington Post) memoir about one woman’s obsessive search for the perfect piano—and about finding and pursuing passion at any age.

The daughter of a pro- fessional musician, Perri Knize was raised in a home saturated in classical music, but it wasn’t until adulthood that she returned to the one instrument that mesmerized her most: the piano. When, in her forties, Perri decides to buy a piano of her own, she begins by searching for a modestly priced upright, but falls madly, illogically, in love with a rare German grand she discovers in a New York showroom. After a long dalliance, Knize refinances her house to purchase her piano and has the instrument shipped to Montana. But when it arrives, the magical sound that enthralled her is gone, and the tone is dead and dull. One piano tuner after another arrives to fix it, but no one can.

Knize sets out on an epic journey to restore the instrument to its rightful sound and to understand its elusive power. This quest leads her into an international subculture of piano aficionados, all intriguing and eccentric characters—concert artists, dealers, technicians, composers, designers, and builders—whose lives have been transformed by the spell of a piano. She even hikes into the Austrian Alps to learn how the special trees used to build her piano are grown and harvested.

Beautifully composed, passionately told, Grand Obsession is itself a musical masterpiece—and will resonate with anyone who has ever experienced deeply passionate desire.
Perri Knize grew up the daughter of a professional musician, in a home saturated in classical music.  But instead of following her father’s path of a career in music, she became an award-winning environmental policy reporter for magazines, including Audubon and the Atlantic Monthly.   In her 40s, she felt called to return to her first love, the piano. She lives in Montana with her husband, Oliver, their mastiff, Ben, their cat, Sylvia, and her piano, Marlene.
"Knize...explores the nature of music and its ability to touch us."

"...a memoir about passion and ephemerality with lasting elegance and grace."

"Reading this book, you want to go out...and learn the piano, or at least visit a shop and stroke one."

"For me, Grand Obsession was intimately powerful: It changed the way I look at the world."

"[Written] in a wonderfully evocative, lushly romantic style...music lovers will resonate to...[Knize's]...pursuit of a gorgeous sound."

"A well-written, heartfelt, classy paean to a singular instrument."

"I was hooked from the first page....this book travels beyond the sphere of mere music."

"Knize has crafted a poetic tribute to the piano...Warmly recommended for all collections."