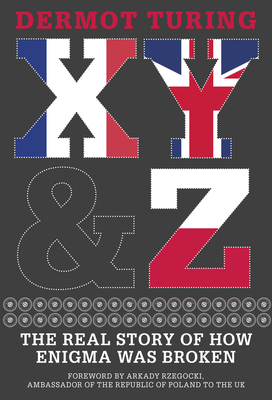 December, 1932 In the bathroom of a Belgian hotel, a French spymaster photographs secret documents—operating instructions of the cipher machine, Enigma. A few weeks later a mathematician in Warsaw begins to decipher the coded communications of the Third Reich and lay the foundations for the code-breaking operation at Bletchley Park. The co-operation between France, Britain and Poland is given the cover name ‘X, Y & Z’. December, 1942 It is the middle of World War II. The Polish code-breakers are in France on the run from the Gestapo. People who know the Enigma secret are not supposed to be in the combat zone for fear of capture so MI6 devises a plan to exfiltrate them. If it goes wrong, if they are caught, they could give away the greatest secret of the war. X, Y & Z describes how French, British and Polish secret services came together to unravel the Enigma machine. It tells of how, under the very noses of the Germans, Enigma code-breaking continued in Vichy France. And how code-breakers from Poland continued their work for Her Majesty’s Secret Service, watching the USSR’s first steps of the Cold War. The people of X, Y and Z were eccentric, colourful and caught up in world events that they could watch not control. This is their story…

Dermot Turing is the author of Prof, the acclaimed biography of Alan Turing. He spent his career in the legal profession after graduating from Cambridge and Oxford, and is a trustee of Bletchley Park. He has extensive knowledge of World War II code-breaking and is a regular presenter at major cryptology events, most recently presenting at the US National Security Agency’s Center for Cryptologic History. He lives in St Albans.

“A remarkable tale of intellect, bravery and camaraderie that reads like a nail-biting spy novel.”—Nature.com