Tobruk 1942: Rommel and the Battles Leading to His Greatest Victory (Paperback) 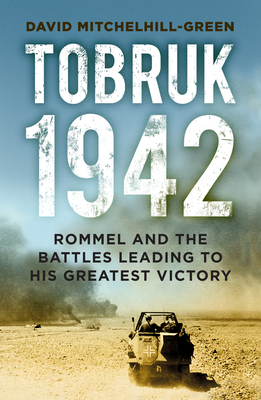 Tobruk 1942: Rommel and the Battles Leading to His Greatest Victory (Paperback)


We can usually get this book in 3 to 7 days, except during a pandemic. We are doing our best
Controversial reevaluation of one of the Allies’ worst defeats at the hands of the Desert Fox, Rommel

Tobruk was one of the greatest Allied victories – and one of the worst Allied defeats – of the Second World War. The 1942 fiasco rocked the very foundation of Winston Churchill’s premiership. It revived the flagging hopes of the German people and fanned the flames of Arab unrest. Furthering Rommel’s ascendency and souring relations within the British Commonwealth, it marked a turning point in Anglo-American relations and the fight against the Third Reich.

Utilizing a wealth of primary and secondary sources Tobruk 1942 examines why the fortress fell to Rommel’s Axis forces in just 24 hours when it held out against repeated attacks the previous year. Comparing the 1941 and 1942 battles, this book presents a new perspective on Tobruk – the isolated Libyan fortress, and symbol of Allied freedom, which for a period in the war captured the world’s attention.
For the past twenty-five years DAVID MITCHELHILL-GREEN has travelled the globe documenting former Second World War battlefields for newspaper and magazine feature articles. Research for a Master of Arts in history at Monash University, Melbourne, formed the basis of this book. His other books include Fighting in Ukraine: A Photographer at War, and two forthcoming pictorials: With Rommel in the Desert and Rommel in North Africa. A keen photographer, his photos featured in Castles of the Samurai: Power and Beauty.