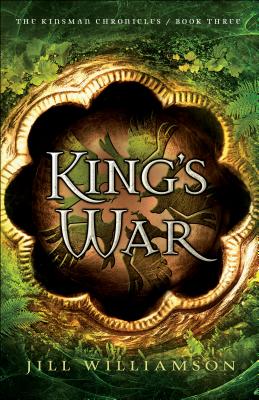 This is book number 3 in the Kinsman Chronicles series.

One battle is over, but the war has just begun. They escaped the Five Realms and have found a home, but peace is much harder to find. The aftermath of the Battle of Sarikar should have been a time to mourn those lost in the slaughter. The enemies of Armania are many, however, and when one steps back to regroup, another surges forward in attack.

While the remnant must take responsibility for the evil they brought to Er'Rets, it would seem that something just as dark already existed in this new world. The growing struggle between Armania and Barthel Rogedoth is but a pale reflection of a far more dangerous battle for the souls of humanity.

And so begins this awe-inspiring conclusion to Jill Williamson's Kinsman Chronicles. The Hadar family and their allies prepare to make one final stand in the name of Arman. There shall be war--in Er'Rets and in the Veil--to vanquish evil or be ruled by darkness.
Jill Williamson writes fantasy and science fiction for teens and adults. Jill grew up in Alaska, staying up and reading by the summer daylight that wouldn't go away. This led to a love of books and writing, and her debut novel, By Darkness Hid, won several awards and was named a Best Science Fiction, Fantasy, and Horror novel of 2009 by VOYA magazine. She loves giving writing workshops and blogs for teen writers at www.goteenwriters.com. She now lives in the Pacific Northwest with her husband, two children, and a whole lot of deer. Visit her online at www.jillwilliamson.com.