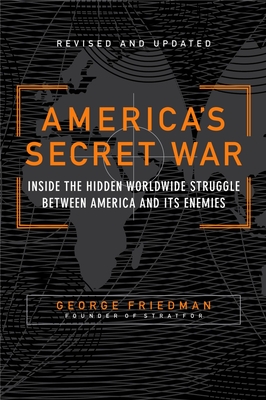 By George Friedman
$17.80
Special Order -- These books can be hard for us to get

George Friedman delivers the geopolitical story that the mainstream media has been unable to uncover — the startling truth behind America’s foreign policy and war effort in Afghanistan, Iraq, and beyond.


Friedman, founder of Stratfor, one of the world’s most respected private global intelligence firms, and Geopolitical Futures, has an unmatched ability to provide clear perspective on the current geopolitical map. In America's Secret War, George Friedman identifies the United States’ most dangerous enemies, delves into presidential strategies of the last quarter century, and reveals the real reasons behind the attack of 9/11—and the Bush administration’s motivation for the war in Iraq. It describes in eye-opening detail America’s covert and overt efforts in the global war against terrorism: Not only are U.S. armies in combat on every continent, but since 9/11 the intelligence services of dozens of nations have been operating in close partnership with the CIA.

Drawing on his vast information-gathering network, Friedman presents an insightful picture of today’s world that goes far beyond what is reported on television and in other news media.

The threat of a suitcase nuclear bomb in New York and how that changed the course of the war.

The deal the U.S. made with Russia and Iran which made the invasion of Afghanistan possible – and how those deals affect the United States today.

How fear and suspicion of the Saudis after 9-11 tore apart the Bush-Saudi relationship and why Saudi Arabia’s closest friends in the administration became the Saudi’s worst enemies.

The real reasons behind George W. Bush’s invasion of Iraq and how WMD became the cover for a much deeper game.

How the CIA miscalculated about Saddam Hussein’s and Iran’s real plans, leaving the U.S. bogged down in the war.

How the war in Iraq began with a ruse, pretending that a “target of opportunity” attack on Saddam Hussein had presented itself.

The real story about why the U.S. raises and lowers its alert status and why the United States can’t find and destroy al Qaeda.

America's Secret War is an unprecedented look at the new world war being waged behind-the-scenes today. It is sure to stir debate and capture headlines around the world.

GEORGE FRIEDMAN is founder and chairman of Geopolitical Futures, which specializes in geopolitical forecasting. Prior to 2015, Friedman was chairman of the global intelligence company Stratfor, which he founded in 1996. Friedman is the author of six books, including the New York Times bestsellers The Next 100 Years and The Next Decade. He is a senior advisor to Gallup, Inc.  He lives in Austin, Texas.

Acclaim for George Friedman and STRATFOR

“Stratfor was miles ahead of CNN and all the other media…. A private quasi-CIA, Stratfor has enjoyed an increasing vogue in recent years as a result of the heady forecasts and many news breaks…. The web site has a huge underground following, dating back to the 1999 Kosovo War.”
--Barron’s

“Stratfor moved the financial markets all by itself when it reported that a Russian envoy was en route to Baghdad to negotiate peace with the Iraqis…. There is a temptation, when you are around George Friedman, to treat him like a Magic 8 Ball.”
--The New York Times Magazine

“Predictions have made George Friedman a hot property these days.”
--The Wall Street Journal

“Stratfor is changing the way we think about news.”
--The American Spectator

“They fill the appetite for international news and analysis that the newsweeklies once filled. But they do it twice as well as the newsweeklies – and in real time.”
--Lee Smith, Senior Editor, GQ

“The Friedmans: better than the CIA.”
--The Industry Standard