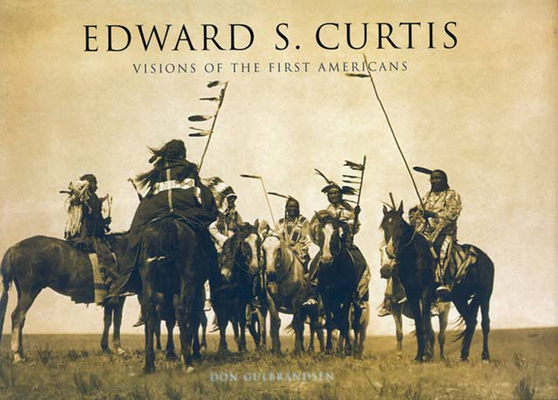 By Don Gulbrandsen
$24.99
Backordered. There will likely be a delay in getting this book

Edward S. Curtis: Visions of the First Americans is a tribute to the photographer, his work, but above all to the Native Americans he photographed. Chapters on many different Native American tribes make this collection unique. Edward Curtis's recognizable style, saturated with sepia, is immediately recognizable. He captures not only the striking faces of his subjects, but also a glimpse into the lifestyle of each Native American tribe he photographed. Women grind corn, and communities gather outside their traditional living areas. Atop horses, Native Americans ride on the prarie. Papooses are bundled in woven carrying packs, and men are dressed in full feathered regalia. These images paint a picture, known to us now only as a historical memory. Many tribes are featured in this volume, from the familiar Apache and Navaho to lesser-known tribes. This book will draw in readers who are interested in world cultures, along with photography buffs and historians. This hardcover volume is a wonderful addition to any library.

Don Gulbrandsen became a Green Bay Packers fan in the late 1960s when he realized that not only were they the best team around, but they had a running back who shared his name—former Texas Tech star Donny Anderson. This was stunning decision for a young boy growing up in northern Illinois, and whose father was a Chicago Bears fan. Don\u2019s transformation into rabid Packer diehard became complete two decades later when he finally moved to the land of his dreams, Wisconsin. Although the Lindy Infante-coached franchise was struggling mightily at the time, it was great to be living in a place where nearly everyone—man or woman, young or old, black or white—found common ground in their devotion to the Packers. Don relished opportunities to attend games, visit the Packers Hall of Fame, spend Sundays glued to the TV, and while away hours in discussion with friends and coworkers analyzing draft prospects, player injuries, and NFC Central opponents. And when the Ron Wolf/Mike Holmgren/Brett Favre/Reggie White era finally arrived, Don—like all Packer fans—was rewarded for his unwavering confidence in the team. Don has spent two decades as a publishing professional, focused primarily on enthusiast books and magazines covering a wide variety of topics: sports, hunting and fishing, home improvement, transportation, collectibles, and more. He has worked as an editor in both magazine and book publishing and is the author of several books.