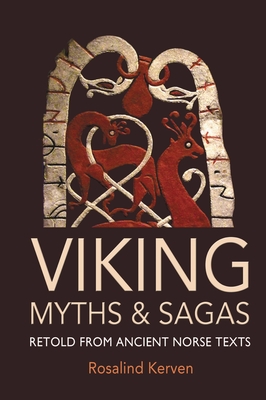 
This book has been declared out of stock indefinitely, so we are unlikely to be able to get it.
This is an accessible, meticulously researched introduction to the oral tradition passed down since the Viking Age. Based on the oldest texts, Vikings Myths and Sagas is authentically interpreted and retold by a highly-acclaimed storyteller.

A wide range of information is provided brings to life the most significant Viking Age stories. From the true accounts of their discovery of North America 500 years before Christopher Columbus, to the myths and legends that pushed the Vikings to the ends of the Earth.

The text is written with the consultation of leading Icelandic academics. Complete with detailed notes, a comprehensive glossary, and an assortment of authentic proverbs, poems, riddles, and spells no other source so thoroughly goes into Norse history.

Read the important myths from the mighty gods who dominated Viking pagan worship, like Thor the giant slayer and the mysterious, one-eyed Odin. Be shocked by the earth-shaking treachery of the trickster Loki, and discover the secret of eternal youth. Learn how they believed the world was created, and how it is predicted to end.

Iconic Viking women are introduced and profiled. From Aud the Deep Minded, one-time queen who set up a Utopian community, to Melkorka, the abducted princess who brought dignity to slavery. Admire legendary female role models such as the goddess Frigg, who persuaded the whole of creation to weep with her and Gudrun who single-handedly destroyed the mightiest king in Europe.

The mystery behind ancient Viking Age carvings are also explained. Myths such as Thor fishing up the World Serpent, Sigurd slaying a dragon, Odin riding an 8-legged horse, Gunnar condemned to death in a snake-pit, and many other extraordinary stories.

Rosalind Kerven is the author of 60+ books for many leading publishers.  She has been translated into numerous languages, is highly acclaimed by reviewers, recommended by the American Library Association.  She has specialized knowledge and skills in collecting and retelling world myths and legends for the past 30 years.