1001 Comics You Must Read Before You Die: The Ultimate Guide to Comic Books, Graphic Novels and Manga (Hardcover) 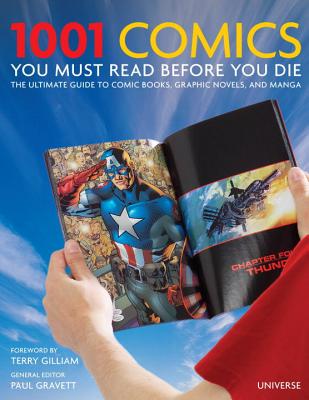 1001 Comics You Must Read Before You Die: The Ultimate Guide to Comic Books, Graphic Novels and Manga (Hardcover)

Visually amazing, this critical history of comic books, manga, and graphic novels is a must-have for any comic buff or collector.  Over the centuries, comic books and their offshoots, such as graphic novels, manga, and bandes dessinées, have evolved into a phenomenally popular, influential, and unique art form through which we can express our opinions, our fantasies, our nightmares, and our dreams. In short: comics are emphatically no longer just for kids. This volume is the perfect introduction to a dynamic and globally popular medium, embracing every graphic genre worldwide to assess the very best works of sequential art, graphic literature, comics, and comic strips, past and present. Packed with fantastic reproductions of classic front covers and groundbreaking panels, this book is visually stunning as well as a trove of information— perfect for the passionate collector and casual fan alike.

Paul Gravett was hailed by The Times of London as "the greatest historian of the comics and graphic novel form." Gravett co-edited the important British magazine Escape (1983-89), and was an independent exhibition curator, journalist, lecturer, and broadcaster. He is the author of Manga: 60 Years of Japanese Comics (2004), Graphic Novels (2005), Great British Comics (2006), Mammoth Book of Best Crime Comics (2008), and Incredibly Strange Comics (2008).
"1001 Comics You Must Read Before You Die emphasizes comic books, graphic novels, and manga from recent decades though the earliest entry dates to 1867. Comics historian Paul Gravett, the book’s general editor, consulted specialists in 27 countries." ~Boston Globe

"There have been other guides to comics and comics characters, but this book is the only one that is global in breadth, considerate of every genre, fully illustrated, and offers a critical assessments to winnow out only the very best works. This colorful and authoritative review includes every important artist in comic books, manga and graphic novels. Visually amazing, this critical history of the graphic narrative form - including comic books, manga and graphic novels - is a must have for any comic buff or collector." ~Legacycomics.com

"Recommended for those with a curiosity about the medium and highly recommended for fans who might need to expand their horizons." ~Forcesofgeek.com