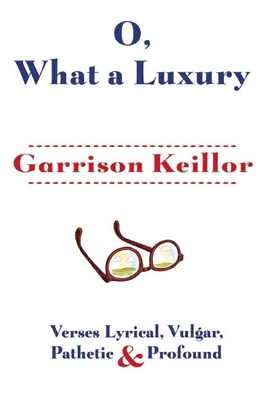 
This book has been declared out of stock indefinitely, so we are unlikely to be able to get it.
O What a Luxury: Verses Lyrical, Vulgar, Pathetic & Profound is the first poetry collection written by Garrison Keillor, the celebrated radio host of A Prairie Home Companion. Although he has edited several anthologies of his favorite poems, this volume forges a new path for him, as a poet of light verse. He writes--with his characteristic combination of humor and insight--on love, modernity, nostalgia, politics, religion, and other facets of daily life. Keillor's verses are charming and playful, locating sublime song within the humdrum of being human.
Garrison Keillor lives in St. Paul, Minnesota, home of A Prairie Home Companion, his radio show that has been on the air since 1974. He is the author of many books including the Lake Wobegon novels, and he edits the Good Poems anthologies. He is a contributor to the New Yorker, Atlantic Monthly, and Salon.com. In 2006, he wrote the screenplay for the film A Prairie Home Companion, directed by Robert Altman.

"Keillor is very clearly a genius. His range and stamina alone are incredible . . . he has the genuine wisdom of a Cosby or Mark Twain." Slate

"America’s foremost humorist and social pundit . . . Keillor’s running commentary about the human condition has the uncanny ability to home in on the pulse of America." PBS

"Keillor has a way of reconciling seeming contradictions. A purveyor of all things folksy and down-home, he is a highly cultivated, worldly man." AARP