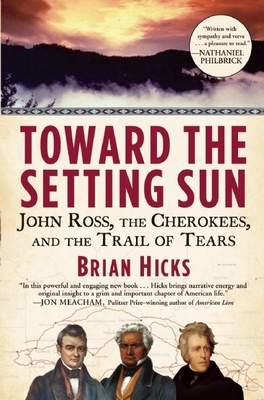 “Few have heard of John Ross, yet he is surely one of the 19th century's greatest heroes. In the face of a systematic and aggressive campaign to take Cherokee land, Ross defended his people with both ferocity and dignity. The taking of native lands, particularly the forced and deadly migration of the Cherokee people, is a tragic chapter in our nation's story. Brian Hicks is a skilled writer and historian and this work is enlightening, powerful, and highly recommended.”
— Christopher Rose, Andover Bookstore, Andover, MA

"Richly detailed and well-researched, this heartbreaking history unfolds like a political thriller with a deeply human side."--Publishers Weekly Toward the Setting Sun chronicles one of the most significant but least explored periods in American history, recounting the unknown story of the first white man to champion the voiceless Native American cause. Son of a Scottish trader and a quarter-Cherokee woman, John Ross was educated in white schools. It was not until he was twenty-two, when he fought alongside "his people" against the Creek Indians, a neighboring rebel tribe, that he knew the Cherokees' fate would be his. Cherokee chief for forty years, he would guide the tribe through, its most turbulent period. As increasing numbers of whites settled illegally on the Cherokee Nation's native land, including Ross's beloved home at Head of Coosa, the chief remained steadfast in his refusal to sign a treaty agreeing to removal. When a group of renegade Cherokees betrayed him and negotiated an agreement with Jackson's men behind Ross's back, he was forced to give way and begin the journey west. In one of America's great tragedies, thousands of Cherokees died during the tribe's migration on the Trail of Tears to Oklahoma.

A vigorous account of the forced removal of the Cherokee people from their southern homelands. . .[Hicks] takes a measured view of Ross’s opponents and allies alike, shedding new light on the career of other eminent figures such as the newspaperman and Confederate general Stand Watie. A welcome addition to Cherokee history.”Kirkus Review

Richly detailed and well-researched, this heartbreaking history unfolds like a political thriller with a deeply human side.”Publishers Weekly

By focusing on the people behind the tragedy of the Cherokee and the Trail of Tears, Brian Hicks makes us see how individual men and women shaped the complex course of history. Written with sympathy and verve, Toward the Setting Sun is an important book that is also a pleasure to read.”Nathaniel Philbrick, author Why Read Moby-Dick?, The Last Stand: Custer, Sitting Bull, and the Battle of the Little Bighorn and the National Book Award-winning In the Heart of the Sea

In this powerful and engaging new book, Brian Hicks tells the compelling story of Chief John Ross and the tragedy of the Cherokee Nation. By focusing on the Ross family, Hicks brings narrative energy and original insight to a grim and important chapter of American life.”Jon Meacham, Pulitzer Prize-winning author of American Lion

It’s a particularly horrific chapter in the consistently shocking record of the United States’ treatment of the Native Americans. Brian Hicks, a South Caroline journalist, adroitly relates this tragedy in Toward the Setting Sun through the experiences of the Cherokees’ principal chief John Ross. It’s a gripping story, told by Hicks with perception and sensitivity. The author rightly compares it to Gone with the Wind or The Godfather in its scope and drama.” Anne Bartlett, Book Page

Hicks is a skilled writer and historian and this book about a tragic chapter in our nation’s story is enlightening and powerful.” The Boston Globe

With careful probing and quiet eloquence, Brian Hicks shows us the moral complexities of a leader struggling to make sense of his shrinking world. You feel the fate of John Ross and the Cherokees, a great people whose only crime was living in the path of a ravenous, covetous empire.”Hampton Sides, author of Blood and Thunder

"The begrudging apology from the U.S. Senate in December, 2009, should be only the beginning of a new national awareness, to which Mr. Hicks has ably contributed.” A.J. Langguth

Brian Hicks' mastery has made history come alive as he reveals the voices of the past reaching out to us. Toward the Setting Sun is an extraordinary account of a sad time in our nation's history. It is truly timeless and of great historical worth.” Clive Cussler, author of Spartan Gold

Toward the Setting Sun’ is a powerful metaphor for the U.S. government’s forced expatriation of the [Cherokees] Hick’s book is a must-read [It] bears the trenchant style of a fine writer.” The Post and Courier

[Well] written Hicks does a great job of establishing and building up his information.” Library Journal

Brian Hicks tells a compelling story about a determined Cherokee leader who was forced to make hard choices absent any good options in a rapidly changing land. Toward the Setting Sun is an honest, provocative examination of tragic betrayal and the limits of power for the Native American.”Scott Zesch, author of The Captured: A True Story of Abduction by Indians on the Texas Frontier

A riveting history of the white chief who led the Cherokee tribe through their most progressive era, then through their greatest tragedy.” The Daily Beast

Hicks renders relatively familiar portraits of U.S. political figures The real interest here is in the secondary characters His story is one of a people responding to imperialism, along with a testimonial to the resilience of a chieftain and his followers It is an excellent introduction to an important episode in U.S. history, and a gateway to further Native American study.” Jim Cullen, History New Network

[T]he engaging writing style will draw in readers and will make accessible to a wide audience both the magnitude of the tragedy of removal and the resiliency of the Cherokee peoples” Choice, Current Reviews for Academic Libraries