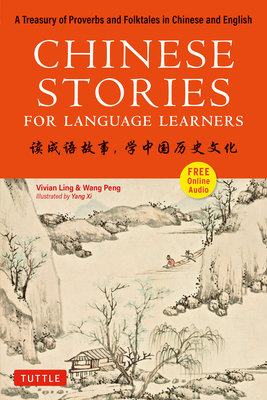 
We can usually get this book in 3 to 7 days, except during a pandemic. We are doing our best
The highly anticipated next book in Tuttle's Stories for Language Learners series is here This book presents 22 classic Chinese proverbs and the traditional tales behind them. The stories are bilingual, with the Chinese and English versions presented on facing pages. Each includes an explanation of how the proverb is used today, cultural notes, vocabulary and discussion questions. Audio recordings of the tales read by native speakers are included--giving students a chance to improve their pronunciation and comprehension. Some of the proverbs featured in this collection include:
Whether being used in a classroom or for self-study, Chinese Stories for Language Learners provides an educational and entertaining way for intermediate Mandarin learners to expand their vocabulary and understanding of the language.
Vivian Ling was born in wartime China and educated in the U.S. She taught for 24 years at Oberlin College before moving overseas to direct study-abroad Chinese language programs, most notably the Inter-University Program for Chinese Language Studies at National Taiwan University in Taipei and Tsinghua University in Beijing. Her last position was Director of the Chinese Flagship program at Indiana University. She has authored and edited Chinese language textbooks, dictionaries, books on modern Chinese literature and, most recently, The Field of Chinese Language Education in the U.S.: A Retrospective of the 20th Century. She lives in Washington DC. Peng Wang has been on the faculty at Georgetown University since 2002, teaching various Chinese language courses including Business Chinese and Chinese for Heritage Learners. Previously, she was the chief instructor at the Inter-University Program for Chinese Language Studies at Tsinghua University, as well as a visiting faculty at Oberlin College and Brown University. Yang Xi is an up-and-coming artist and illustrator in China. She is currently a Master of Arts candidate at the Nanjing Art Institute College of Fine Arts. Her distinctive style can be characterized as amalgamation of classical and contemporary, Chinese and Western.