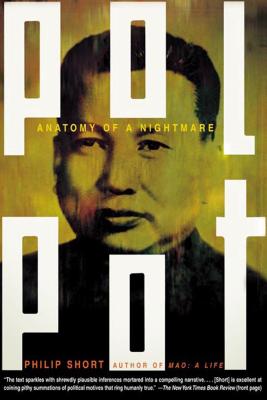 Observing Pol Pot at close quarters during the one and only official visit he ever made abroad, to China in 1975, Philip Short was struck by the Cambodian leader's charm and charisma. Yet Pol Pot's utopian experiments in social engineering would result in the death of one in every five Cambodians—more than a million people.

How did an idealistic dream of justice and prosperity mutate into one of humanity's worst nightmares? To answer these questions, Short traveled through Cambodia, interviewing former Khmer Rouge leaders and sifting through previously closed archives around the world. Key figures, including Khieu Samphan and Ieng Sary, Pol's brother-in-law and foreign minister, speak here for the first time.

Short's masterly narrative serves as the definitive portrait of the man who headed one of the most enigmatic and terrifying regimes of modern times.

"Short chronicles the stages of the Cambodian revolution with admirable clarity . . . A few chilling details, expertly deployed, do the necessary work." —The New York Times

"A spectacularly efficient job of describing what happened and why . . . A chillingly clear portrait." —The Economist

Philip Short has written several definitive biographies including Mao: A Life and Pol Pot: Anatomy of a Nightmare. He earlier had a long career as a foreign correspondent in Moscow, Beijing, and Washington, D.C., for the BBC, the Economist, and the Times of London.

“A superb, authoritative account of the man and the madness that transformed Cambodia, almost overnight, into hell on earth” —William Grimes, New York Times

“Readable and capacious...the most thorough-going, most closely argued study of the Khmer Rouge to appear to date.” —David Chandler, Far Eastern Economic Review

“Broaden[s} the inquiry to the point where serious history begins, and serious judgments can be made.” —Justin Wintle, Financial Times

“Philip Short's Pol Pot is an almanac of extermination that achieves the near impossible feat of translating madness into logic. This biography is a tour de force.” —David Levering Lewis, Pulitzer Prize-winning author of W. E. B. DuBois

“An intelligent and compassionate account of the Cambodian nightmare.” —The Spectator

“Extraordinary and brilliant... This hugely impressive book is more than just the life story of an individual. It is also the biography of a nation... Short has exposed secrets, knitting together a story which it once seemed would never be told. The result is horrific, but it must be read.” —The Scotsman

“Unerringly broadens the enquiry to the point where serious history begins and serious judgments can be made.” —Financial Times

“A comprehensive and eloquent biography...This is a long, dark and necessary book..” —Literary Review, London

“Short is a gifted biographer who knows his communists. [His account] is the most definitive yet.” —Time [Asian edition]

“Short's most valuable contribution is to bring clear thinking to the question of blame... He is brisk about the cynical policy of Vietnam... and also indicts the Chinese, who have largely escaped censure for their complicity with the Khmer Rouge.” —Sunday Times, London

“A brilliantly detailed account and a salutary one.” —Sunday Herald, Glasgow