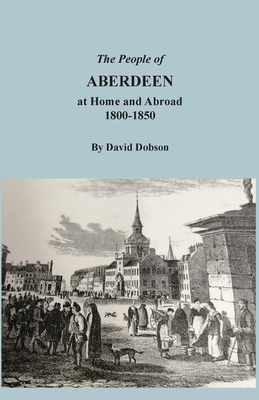 From the medieval period until the Victorian era, Aberdeen was comprised of two separate burghs, Old Aberdeen and New Aberdeen. Old Aberdeen was centered on St. Machar's Cathedral when King David I established a new bishopric there around 1125. New Aberdeen, a burgh since 1214, was an important regional market town and port. The two burghs each had their own burgh council, burgess roll, court, college, and other institutions that maintained their own records. The two burghs merged in the mid-19th century to establish a unified city. Aberdeen became the major city in north-east Scotland, with its economy based on industries such as shipbuilding, whaling, herring fishing, woolens such as stocking-making, and papermaking.

This book contains references to people from Aberdeen at home and abroad between 1800 and 1850. The entries bring together emigrants, their destinations, especially in North America, the West Indies, and Australasia, with their kin who remained in Scotland. The information is derived from a wide range of sources such as court records, contemporary newspapers and journals, monumental inscriptions, and documents found in archives. The Statistical Report of Scotland (OSA), compiled between 1791 and 1799, and the new Statistical Report, conducted between 1832 and 1845, are especially helpful for understanding the rapid changes in Scottish society brought about by the agricultural and industrial revolutions during this period. This work should enable researchers with roots in Aberdeen to put their family into a historical context.