Boyz n the Void: a mixtape to my brother (Paperback) 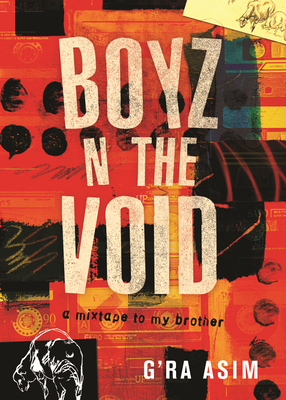 Boyz n the Void: a mixtape to my brother (Paperback)


On Our Shelves Now as of 24 Hours Ago. Please call first to confirm.
Writing to his brother, G’Ra Asim reflects on building his own identity while navigating Blackness, masculinity, and young adulthood—all through wry social commentary and music/pop culture critique

How does one approach Blackness, masculinity, otherness, and the perils of young adulthood? For G’Ra Asim, punk music offers an outlet to express himself freely. As his younger brother, Gyasi, grapples with finding his footing in the world, G’Ra gifts him with a survival guide for tackling the sometimes treacherous cultural terrain particular to being young, Black, brainy, and weird in the form of a mixtape.

Boyz n the Void: a mixtape to my brother blends music and cultural criticism and personal essay to explore race, gender, class, and sexuality as they pertain to punk rock and straight edge culture. Using totemic punk rock songs on a mixtape to anchor each chapter, the book documents an intergenerational conversation between a Millennial in his 30s and his zoomer teenage brother. Author, punk musician, and straight edge kid, G’Ra Asim weaves together memoir and cultural commentary, diving into the depths of everything from theory to comic strips, to poetry to pizza commercials to mapping the predicament of the Black creative intellectual.

With each chapter dedicated to a particular song and placed within the context of a fraternal bond, Asim presents his brother with a roadmap to self-actualization in the form of a Doc Martened foot to the behind and a sweaty, circle-pit-side-armed hug.


Listen to the author’s playlist while you read! Access the playlist here: https://sptfy.com/a18b
G’Ra Asim is a writer, a musician, and an assistant professor of English at Washington University in St. Louis. He has served as writing director at the African American Policy Forum and as graduate teaching fellow in Columbia’s Undergraduate Writing Program. His work has appeared in Slate, Salon, Guernica, The Baffler, and The New Republic. When not writing prose or teaching, he sings, plays bass and writes lyrics for NYC DIY pop punk band babygotbacktalk, who were named one of AfroPunk’s “Top 8 Punkest Bands on the Planet Right Now.”
“Asim’s astute social commentary, poignant storytelling, wit, and solid music criticism will appeal to punk and non-punk readers alike.”
—Kirkus Reviews, Starred Review

“With Boyz n the Void, [Asim] uses the virtues that have been used against him—his skepticism, shrewdness and liminality—to assert his existence, as a young Black man insisting to be acknowledged in a world that either cannot or refuses to see him.”
—The Washington Post

“Like any great mixtape, Asim’s compilation is the most personalized of gifts. . . . Written with love, erudition, and the utmost respect, Boyz n the Void is a genuine keepsake.”
—Paul Beatty, author of The Sellout

“There are just some voices that stop you cold, as resonances of some familiar brilliance but also of something so original, so compelling that you have no choice but to take notice. G’Ra Asim is one of those voices.”
—Mark Anthony Neal, author of Looking for Leroy: Illegible Black Masculinities

“A spellbinding odyssey and a magnificent debut for an exciting young author and thinker.”
—Kimberlé Williams Crenshaw, cofounder and executive director of the African American Policy Forum

“Full of dopamine hits and heartbreak. You don’t want to stop listening, even when it aches. It becomes part of you. These essays are rigorous and tender and funny all at once, charged with humor that doesn’t deflect from difficult honesty so much as it takes you deeper into the maze of truth.”
—Leslie Jamison, New York Times best-selling author of The Empathy Exams

“A critical ethnography of growing up black and punk in the aughts. Asim strikes a balance between total immersion in the scene and the intimacy of a letter sent between brothers. . . . Boyz n the Void is essential reading for black weirdos, punks of all ages, and those invested in impeccably rendered American history.”
—Cyrée Jarelle Johnson, author of Slingshot

“Boyz n the Void is many things—an impassioned paean to high-stakes cultural invention, a brutally honest excavation of the twenty-first-century color line, and a work of brotherly love—but it also marks the emergence of an important black artist.”
—Chris Lehmann, editor of The New Republic

“Boyz n the Void is the Black punk bildungsroman of your dreams: it’s as if Bad Brains had written the smartest book in the world, only better. Asim guides us to the borders of American Blackness and beyond in this debut that’s so mesmerizingly smart and so unsparingly honest it will literally rewrite the playlist in your heart.”
—Junot Díaz, author of The Brief and Wondrous Life of Oscar Wao, winner of the Pulitzer Prize for Fiction