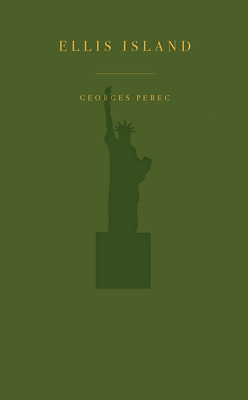 Georges Perec, employing lyrical prose meditations, lists, and inventories, conjures up the sixteen million people who, between 1890 to 1954, arrived as foreigners and stayed on to become Americans. Perec (who by the age of nine was an orphan: his father was killed by a German bullet, and his mother perished in Auschwitz) is wide-awake to the elements of chance in immigration and survival: “To me Ellis Island is the ultimate place of exile. That is, the place where place is absent, the non-place, the nowhere. Ellis Island belongs to all those whom intolerance and poverty have driven and still drive from the land where they grew up.” Ellis Island is a slender Perec masterwork, unique among his many singular works.

The acclaimed poet and scholar Mónica de la Torre contributes an afterword that keeps Perec's writing front and center while situating Ellis Island in the context of America’s current fierce battles over immigration.

The many beautiful, complex books of the acclaimed French author Georges Perec (1936–1982) include Life: A User’s Manual, A Void, W: Or the Memory of Childhood, Things: A Story of the Sixties, A Man Asleep, and 53 Days.

Harry Mathews (1930–2017) was born in New York. A founding editor of the literary journal Locus Solus, he wrote novels, poetry, short fiction, essays, and translations from the French. His many books include Cigarettes (1987), The Sinking of the Odradek Stadium (1999), and The Human Country (2002).

Mónica de la Torre’s is the author of Repetition Nineteen; she teaches at Brooklyn College.
Ellis Island combines poetry with prose and literary quotation with empirical fact, employing the hybridity of text to reflect upon the very concept of integration. While exploring the island—its history, its buildings, its leftovers—Perec identifies Ellis Island as a non-place, an isle of tears, and reveals Emma Lazarus’s metaphor of America’s ‘golden door,’ which is emblazoned upon the Statue of Liberty, to be little but a false promise.

The lyric study of Ellis Island is a mournful counterfactual about what might have been had his parents—and many others—made it across the ocean.… If Perec took pride in not repeating himself, it did not stop him from returning, as if in an elliptical orbit, to the same obsessions: police states, citizens going missing, organized brutality, human fragility.
— Paul Grimstad - The New Yorker