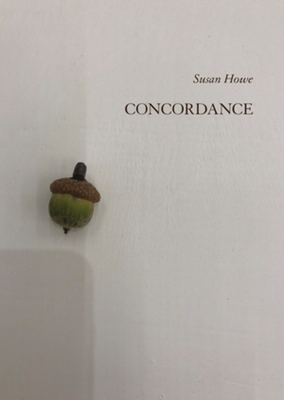 A new poetry book by Susan Howe is always an event

“Only artworks are capable of transmitting chthonic echo-signals,” Susan Howe has said. In Concordance, she has created a fresh body of work transmitting vital signals from a variety of archives. “Since,” a semi-autobiographical prose-poem, opens the collection: concerned with first and last things, meditating on the particular and peculiar affinities between law and poetry, it ranges from the Permian time of Pangea through Rembrandt and Dickinson to the dire present. “Concordance,” a collage poem originally published as a Grenfell Press limited edition, springs from slivers of poetry and marginalia, cut from old concordances and facsimile editions of Milton, Swift, Herbert, Browning, Dickinson, Coleridge, and Yeats, as well as from various field guides to birds, rocks, and trees: the collages’ “rotating prisms” form the heart of the book. The final poem, “Space Permitting,” is collaged from drafts and notes Thoreau sent to Emerson and Margaret Fuller's friends and family in Concord while on a mission to recover her remains from the shipwreck on Fire Island. The fierce ethic of salvage in these three very different pieces expresses the vitalism in words, sounds, syllables, the telepathic spirit of all things singing into air.

Susan Howe has won the Bollingen Prize, the Frost Medal, and the Griffin Award. She is the author of such seminal works as Debths, That This, The Midnight, My Emily Dickinson, The Quarry, and The Birthmark.

In the collage poems language is both word and
image. Source texts are cut up and repurposed, overlaid, truncated—they scatter
across the page and spill into the gutter, run to the outside margins. Small
blocks of quotations are buttressed and broidered by other quotations, slender
and enigmatic, running in the opposite direction; some are illegible, serving
more as shapes, gnomic geometries born of inscrutable utterances. To embody, in graphic or poetic form, a reconstituted
approach to reading and writing, one that reaches beyond the page, through
difficulty, silence, and stutters, to another kind of knowledge.
— Emily LaBarge - Bookforum

One of the many wonders of Concordance, Susan Howe’s latest collection, is the pitch to which Howe has brought her own marriage of words and shapes, even as she continues to demonstrate her sense of the complex interconnections of memory, history, and culture, and her mastery of the traditionally lyrical

In Concordance, it is as if a manuscript, along with the library used to write it, were both wrecked and then washed ashore, mostly lost, although what remains was carefully recombined and artfully reconstructed into something beautiful, monstrous, and new.

Howe frames poetry as a space for dialogue between traditions, literary forms, and artistic mediums in her meditative 11th work. Presented as collages, which cull text from the correspondence and personal papers of Henry David Thoreau, Ralph Waldo Emerson, and Margaret Fuller, Howe’s poems skillfully demonstrate the range and possibilities of collage. Indeed, the gorgeous hybrids range from experiments in syntax to art pieces and visual poems that suggest the material nature of the archive, embodying the idea of literary inheritance. Full of thought-provoking juxtaposition, Howe’s latest is beautifully executed and astonishing.
— Publishers Weekly (starred)

Howe is a poet who has spent her career reminding us that our experiences of meaning and sound are synchronous. Her poems argue this in form as well as content. Delighting in new paths around words, exploring their visual, acoustic, sonic possibilities, she revels in “affinities and relations,” in “signals and transmissions." Howe imbues her investigations of fragment and snippet with such longing that it is hard not to yearn, from one’s own desk, for deep encounter.
— The New York Times

Howe is a poet who has spent her career reminding us that our experiences of meaning and sound are synchronous. Delighting in new paths around words, exploring their visual, acoustic, sonic possibilities, she revels in 'affinities and relations,' in 'signals and transmissions.' Howe imbues her investigations of fragment and snippet with such longing that it is hard not to yearn, from one’s own desk, for deep encounter. She writes against a world that disappears too far away online, in which we lose the bodily perception of space, the tenderness of touch. In this era of social distancing, I felt the prick of these poems: They urged me toward aliveness.
— Tess Taylor - The New York Times Book Review

Among the worthiest heirs to the high-modernist line in American poetry. Howe’s own ‘American aesthetic of uncertainty’ shuttles among forms, genres, and states of matter. What connects it all are Howe’s powers of insight and the implied relations between her sparkling trouvailles.
— Dan Chiasson - The New Yorker