Quaker Aesthetics: Reflections on a Quaker Ethic in American Design and Consumption, 1720-1920 (Hardcover) 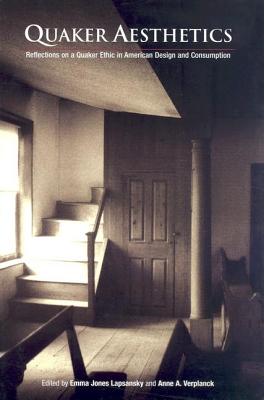 Quaker Aesthetics: Reflections on a Quaker Ethic in American Design and Consumption, 1720-1920 (Hardcover)

The notion of a uniquely Quaker style in architecture, dress, and domestic interiors is a subject with which scholars have long grappled, since Quakers have traditionally held both an appreciation for high-quality workmanship and a distrust of ostentation. Early Quakers, or members of the Society of Friends, who held plainness or simplicity as a virtue, were also active consumers of fine material goods. Through an examination of some of the material possessions of Quaker families in America during the eighteenth, nineteenth, and early twentieth centuries, the contributors to Quaker Aesthetics draw on the methods of art, social, religious, and public historians as well as folklorists to explore how Friends during this period reconciled their material lives with their belief in the value of simplicity.

In early America, Quakers dominated the political and social landscape of the Delaware Valley, and, because this region held a position of political and economic strength, the Quakers were tightly connected to the transatlantic economy. Given this vantage, they had easy access to the latest trends in fashion and business. Detailing how Quakers have manufactured, bought, and used such goods as clothing, furniture, and buildings, the essays in Quaker Aesthetics reveal a much more complicated picture than that of a simple people with simple tastes. Instead, the authors show how, despite the high quality of their material lives, the Quakers in the past worked toward the spiritual simplicity they still cherish.