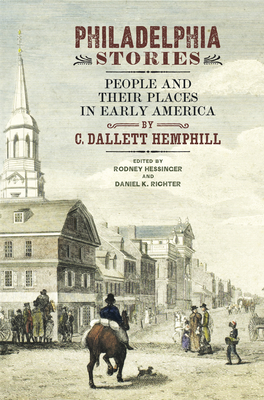 For the average tourist, the history of Philadelphia can be like a leisurely carriage ride through Old City. The Liberty Bell. Independence Hall. Benjamin Franklin. The grooves in the cobblestone are so familiar, one barely notices the ride. Yet there are other paths to travel, and the ride can be bumpy. Beyond the famed founders, other Americans walked the streets of Philadelphia whose lives were, in their own ways, just as emblematic of the promises and perils of the new nation.

Philadelphia Stories chronicles twelve of these lives to explore the city's people and places from the colonial era to the years before the Civil War. This collective portrait includes men and women, Black and white Americans, immigrants and native born. If mostly forgotten today, banker Stephen Girard was one of the wealthiest men ever to have lived, and his material legacy can be seen by visiting sites such as Girard College. In a different register, but equally impressive, were the accomplishments of Sarah Thorn Tyndale. In a few short years as a widow she made enough money on her porcelain business to retire to a life as a reformer. Others faced frustration. Take, for example, Grace Growden Galloway. Born to an important family, she saw her home invaded and her property confiscated by patriot forces. Or consider the life of Francis Johnson, a Black bandleader and composer who often performed at the Musical Fund Hall, which still stands today. And yet he was barred from joining its Society. Philadelphia Stories examines their rich lives, as well as those of others who shaped the city's past. Many of the places inhabited by these people survive to this day. In the pages of this book and on the streets of the city, one can visit both the people and places of Philadelphia's rich history.
C. Dallett Hemphill (1959-2015) was Professor of History at Ursinus College. Rodney Hessinger is Professor of History at John Carroll University. Daniel K. Richter is Roy F. and Jeannette P. Nichols Professor of American History at the University of Pennsylvania.