Poison in the Well: Radioactive Waste in the Oceans at the Dawn of the Nuclear Age (Paperback) 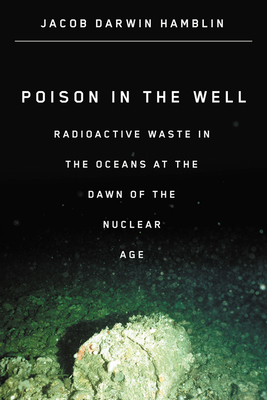 Poison in the Well: Radioactive Waste in the Oceans at the Dawn of the Nuclear Age (Paperback)

In the early 1990s, Russian President Boris Yeltsin revealed that for the previous thirty years the Soviet Union had dumped vast amounts of dangerous radioactive waste into rivers and seas in blatant violation of international agreements. The disclosure caused outrage throughout the Western world, particularly since officials from the Soviet Union had denounced environmental pollution by the United States and Britain throughout the cold war.

Poison in the Well provides a balanced look at the policy decisions, scientific conflicts, public relations strategies, and the myriad mishaps and subsequent cover-ups that were born out of the dilemma of where to house deadly nuclear materials. Why did scientists and politicians choose the sea for waste disposal? How did negotiations about the uses of the sea change the way scientists, government officials, and ultimately the lay public envisioned the oceans? Jacob Darwin Hamblin traces the development of the issue in Western countries from the end of World War II to the blossoming of the environmental movement in the early 1970s.

This is an important book for students and scholars in the history of science who want to explore a striking case study of the conflicts that so often occur at the intersection of science, politics, and international diplomacy.

"Hamblin's examination of radioactive waste dumping in Europe and America is an important and valuable study, particularly for those interested in the role of science, technology, and environment in modern life.
"
— Ronald Rainger

"A fascinating account of the role of health physicists and marine scientists in the international politics and public relations of dumping radioactive waste at sea.
"
— John Krige

"Poison in the Well tells how British and American nuclear scientists have handled radioactive wastes since World War II, despite uncertainty about long-term genetic and somatic effects, creating a legacy that will last for thousands of years. Interdisciplinary turf battles, government secrecy, and technological hubris all play a role in this well-constructed narrative.
"
— Robert W. Seidel

"This impressively researched and judiciously argued book challenges readers to think in new ways about what happens when science, politics, and the environment intersect."
— American Historical Review

"Hamblin's study is timely and absorbing, discussing an aspect of the history of atomic energy programmes on which very little has been known. Poison in the Well is an incredibly precious expose"
— British Journal for the History of Science

"An excellent and balanced book. Hamblin's story is compelling and complex. By avoiding simple conclusions, he provides great insight into Cold War international relations, the dilemmas of going nuclear, the difficulty in determining risk, and the continuing problems we face with untested or newly tested technologies."
— Journal of American History