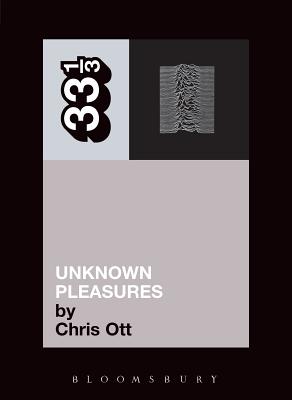 Joy Division's career has often been shrouded by myths. But the truth is surprisingly simple: over a period of several months, Joy Division transformed themselves from run-of-the-mill punk wannabes into the creators of one of the most atmospheric, disturbing, and influential debut albums ever recorded. Chris Ott carefully picks apart fact from fiction to show how Unknown Pleasures came into being, and how it still resonates so strongly today.

EXCERPT
The urgent, alien thwack of Stephen Morris' processed snare drum as it bounced from the left to right channel was so arresting in 1979, one could have listened to that opening bar for hours trying to figure how on earth someone made such sounds. Like John Bonham's ludicrous, mansion-backed stomp at the start of When The Levee Breaks-only far less expensive-the crisp, trebly snare sound with which Martin Hannett would make his career announced Unknown Pleasures as a finessed, foreboding masterpiece. Peter Hook's compressed bass rides up front as Disorder comes together, but it's not until the hugely reverbed, minor note guitar line crashes through that you can understand the need for such a muted, analog treatment to Hook's line. Layering a few tracks together to create a six-string shriek, Hannett's equalization cuts the brunt of Sumner's fuller live sound down to an echoing squeal, revealing a desperation born of longing rather than rage. This is the way, step inside.
CHRIS OTT is a regular contributor to Pitchforkmedia.com, one of the world's leading alternative music websites.