The Spanish Style House: From Enchanted Andalusia to the California Dream (Hardcover) 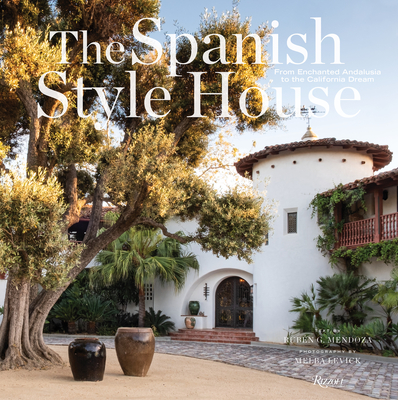 The Spanish Style House: From Enchanted Andalusia to the California Dream (Hardcover)

By Melba Levick (Photographs by), Ruben G. Mendoza (Text by)


We can usually get this book in 3 to 7 days, except during a pandemic. We are doing our best
Luminous new photography showcases contemporary and historic homes in the beloved Spanish Style in Southern California, while offering, as well, a rare look at the original inspirations to the style, born in Andalusia, Spain.

The great appeal of Spanish Style homes lies in their aura of romance and drama, a sense of story, of magic, as well as in their very comfortable and engaging proportions and the great livability of the interior spaces. Deep shadow, arched doorways, trickling courtyard fountains, climbing bougainvillea on wrought-iron window grilles, wood-beamed ceilings, and white plaster walls are all hallmarks of the style. Here, through a celebration of contemporary and historic homes in Southern California, as well as existing historic precedents in Andalusia, Spain--most notably the intricately detailed Casa de Pilatos in Seville and the Alhambra of Granada--The Spanish Style House presents the definitive picture of the style as it exists today.

Featured homes include the George Washington Smith-designed Casa Blanca (1928)--a fantasy made real in stone and stucco replete with the romance of old Morocco in its horseshoe arches, domes, and evocative tile murals--and a Marc Appleton-designed beach house (2007) in Del Mar, California, which is a dream on the sea and an eloquent testament to the virtues of the style for today.
Dr. Rubén G. Mendoza is an archaeologist, photographer, and founding faculty member of the California State University, Monterey Bay. He is coeditor and author of several books, including The California Missions. Melba Levick is a Los Angeles-based photographer with more than sixty books to her name, including The California Missions, The California Casa, and Classic Homes of Los Angeles.