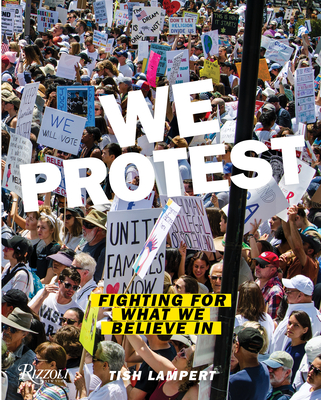 By Tish Lampert, David K. Shipler (Foreword by)
$45.00
We can usually get this book in 3 to 5 days, except during a pandemic. We are doing our best

A call to action--inspiring citizens to stand up and fight for social justice in our nation.

In the last few years we have seen a wave of activism wash across our nation and inspire unprecedented protest and civic engagement. People came together in record-breaking numbers, outspoken and persistent. With the winds of resistance at their backs, people linked arms and set out to defend our freedoms and each other.

Photojournalist Tish Lampert captures the spirit of the heroes and ordinary citizens on their activist journey to defend their American values during the most conflicted era in our recent history. The book charts the chronology of social-change movements that have dominated the headlines over the past several years: the fight for women's rights and gender equality, immigration rights, civil liberties, gun violence, and the environment. Lampert takes us to the front lines of activism, where she has documented each protest and their respective leaders, as well as the legions of ordinary Americans standing together to protect the values of our great nation.

Photojournalist and writer Tish Lampert, based in Los Angeles, focuses her lens on human-rights issues. She freelances for the United Nations, the Conflict Awareness Project, United States Veterans' Artists Alliance, and Border Angels. She has won several awards for her work in the Democratic Republic of Congo for the Congo lowland gorilla. Lampert is a recipient of two Nathan Cummings Foundation Family Grants in 2013 and 2019. She is the host of the podcast America Speaks with Tish Lampert. David K. Shipler, a former New York Times correspondent in New York, Saigon, Moscow, Jerusalem, and Washington, is the author of seven books, including Freedom of Speech: Mightier Than the Sword, and the best sellers Russia: Broken Idols, Solemn Dreams, and The Working Poor: Invisible in America. His book Arab and Jew: Wounded Spirits in a Promised Land, won the Pulitzer Prize in 1987.