Adobe Architecture: A Simple Guide with Plans for Building with Earth (Paperback) 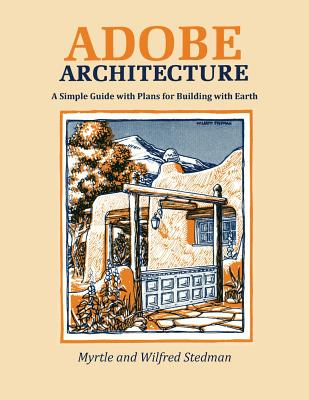 Adobe Architecture: A Simple Guide with Plans for Building with Earth (Paperback)


We can usually get this book in 3 to 7 days, except during a pandemic. We are doing our best
Dreaming of building an adobe home? This classic guide, with floor plans ranging from a small casita to larger ones gives 18 comprehensive period designs for the traditional adobe (the earthern "bricks" used all over the world) house adapted to building materials, plumbing, heating and small lot sizes of today. Thousands of readers have found this a valuable handbook. The authors also venture into actual adobe brick-making, construction techniques, furnishing, even how to make a horno, a traditional Indian oven. Illustrated, detailed diagrams, house plans. The first seeds for the concept for this book on adobe architecture were sown as early as 1916, when Wilfred Stedman was a student at the Art Students League in New York City. It was there that he saw Ernest Blumenschein and Bert Phillips' paintings of adobe homes in villages in and around Taos and Santa Fe, New Mexico. When in the early 1920s and 1930s Wilfred and Myrtle came to see and experience this area for themselves, they met Mary Austin, Alice Corbin Henderson, Will Shuster, Frank Applegate, Josef Bakos and Mabel Dodge Luhan-all famous artists and writers of that time. These people made themselves and their friends from all over the world feel at home in this vernacular architecture. While nowhere in the United States is the Earth Building spirit as revered as in Santa Fe and Taos, new interest is spreading all over the world. New research and new technology is being combined with the traditional in keeping with an overall awakening to the natural resources and beauty of our planet and with a new personal sense of responsibility on the part of individuals in regard to better planning in the use of these. There is a new sense of joy in finding out how much one can do oneself with natural materials. * * * * * Myrtle Stedman was known as an "Artist in Adobe," designing, building, and remodeling adobe homes under a contractor's license. She was also a well-known artist whose academic training started in 1927 when she was a student in the Houston Museum of Fine Arts school. Her English born husband, Wilfred Stedman, whose background was in architecture as well as in painting and illustrating was recognized as one of the most outstanding artists of the American Southwest. Adobe architecture in New Mexico was one of Wilfred's favorite topics of conversation and Myrtle was instilled with the love of adobes from the moment they were married. After his death in 1950, Myrtle went on to become one of the foremost authorities on adobe construction. Myrtle Stedman was a member of PEN New Mexico, a branch of PEN Center USA West of International PEN and believed that there is no end to what the mind can do with the eye and hand, in time and in spirit. She is also the author of "Artists in Adobe," "A House Not Made With Hands," "Adobe Remodeling and Fireplaces," "Of One Mind," "Of Things to Come," "Ongoing Life," "Rural Architecture," "The Ups and Downs of Living Alone in Later Life," and "The Way Things Are or Could Be," all from Sunstone Press.