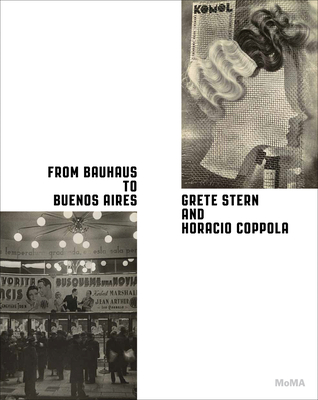 By Grete Stern (Photographer), Horacio Coppola (Photographer), Roxana Marcoci (Contribution by)
$60.00
We can usually get this book in 3 to 5 days, except during a pandemic. We are doing our best

Published to accompany the first US museum exhibition of the work of German-born Grete Stern and Argentinean Horacio Coppola, From Bauhaus to Buenos Aires explores the individual accomplishments and parallel developments of two of the foremost practitioners of avant-garde photography in Europe and Latin America. The book traces their artistic development from the late 1920s, when Stern established a pioneering commercial studio, ringl + pit, with her friend Ellen (Rosenberg) Auerbach, and Coppola began groundbreaking experimentations with photography in his native Argentina, to their joint studies at the Bauhaus and travels through Europe in the early 1930s, through the mid-1950s, by which time they had firmly established the foundations of modern photography in Buenos Aires. The couple effectively imported the lessons of the Bauhaus to Latin America, and revolutionized the practice of art and commercial photography on both sides of the Atlantic by introducing such innovative techniques as photomontage, embodied in Stern's protofeminist works for the women's journal Idilio, and through Coppola's experimental films and groundbreaking images for the photographic survey Buenos Aires 1936. Featuring a selection of newly translated original texts by Stern and Coppola, and essays by curators Roxana Marcoci and Sarah Meister and scholar Jodi Roberts, From Bauhaus to Buenos Aires is the first publication in English to examine the critical intersections that defined the notable careers of these two influential artists. Grete Stern (1904-99) began taking private classes with Walter Peterhans--soon to become head of photography at the Bauhaus--in Berlin in 1927. In Buenos Aires during the same period, Horacio Coppola (1906-2012) initiated his photographic experimentations and in 1929 founded the Buenos Aires Film Club to introduce foreign films to Argentine audiences. His burgeoning interest in new modes of photographic expression led him to the Bauhaus in 1932, where he met Stern and they began their joint history. Following the close of the Bauhaus in 1933, Stern and Coppola fled Germany and established themselves briefly in London before embarking for Buenos Aires in 1935. There they mounted an exhibition in the offices of the avant-garde literary magazine Sur, announcing the arrival of modern photography in Argentina.