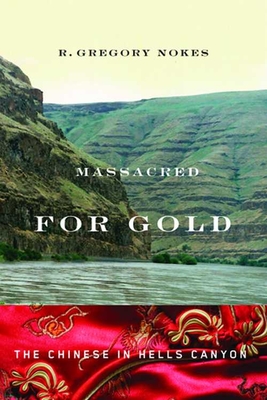 In 1887, more than 30 Chinese gold miners were massacred on the Oregon side of Hells Canyon, the deepest canyon in North America. Massacred for Gold, the first authoritative account of the unsolved crime—one of the worst of the many crimes committed by whites against Chinese laborers in the American West—unearths the evidence that points to an improbable gang of rustlers and schoolboys, one only 15, as the killers.

The crime was discovered weeks after it happened, but no charges were brought for nearly a year, when gang member Frank Vaughan, son of a well-known settler family, confessed and turned state’s evidence. Six men and boys, all from northeastern Oregon’s remote Wallowa country, were charged—but three fled, and the others were found innocent by a jury that a witness admitted had little interest in convicting anyone. A cover-up followed, and the crime was all but forgotten for the next 100 years, until a county clerk found hidden records in an unused safe.

In bringing this story out of the shadows, Nokes examines the once-substantial presence of Chinese laborers in the interior Pacific Northwest, describing why they came, how their efforts contributed to the region’s development, and how too often mistreatment and abuse were their only reward.

R. GREGORY NOKES is the author of Breaking Chains: Slavery on Trial in the Oregon Territory, Massacred for Gold: The Chinese in Hells Canyon, and The Troubled Life of Peter Burnett: Oregon Pioneer and First Governor of California. He traveled the world as a reporter and editor for The Associated Press and the Oregonian. A graduate of Willamette University, he attended Harvard University as a Nieman Fellow. His reporting on the 1887 murders of more than thirty Chinese gold miners in Hells Canyon resulted in a formal designation of the site as Chinese Massacre Cove and was the basis for an Oregon Public Broadcasting documentary. Greg and his wife, Candise, live in West Linn, Oregon.