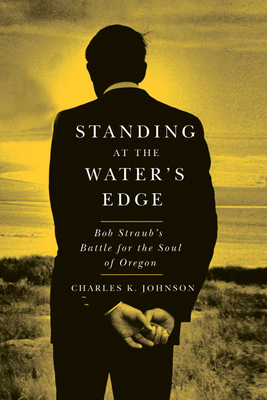 A man of intelligence, drive, creativity, and fascinating contradictions, Straub overcame personal challenges and inevitable comparisons to his charismatic predecessor and friendly Republican rival, Tom McCall, to have a lasting impact on Oregon and the nation. Charles Johnson shares insights into Straub’s significant legacy, focusing on his leading role in the state’s financial and environmental issues and his influence on McCall. Johnson also reveals much of Straub’s warm personal story, along with his secret struggles, including his battle with depression while Governor.

Standing at the Water’s Edge offers rich descriptions of other intriguing political figures of the time as well, capturing the flavor of what has been called Oregon’s political “golden age” of the sixties and seventies—created in part by the symbiotic relationship between Straub and McCall—and describing how and why it ended.

Standing at the Water’s Edge is an essential addition to the literature about Oregon’s political leaders for historians, political scientists, and general readers interested in Oregon history.

Charles K. Johnson is a Portland writer, fundraiser, and activist. A native Oregonian, he has been active in environmental politics since childhood. After a decade in national politics, working with Physicians for Social Responsibility and as Executive Director of Nuclear Free America, Johnson returned to Oregon, where he was instrumental in making a home for the Robert W. Straub Archives at Western Oregon University’s Hamersly Library.

“Bob Straub was a doer, not a talker. He has passed on to all of us the priceless inheritance of his life’s work. I always sensed that Bob and his family understood what an important contribution he made to the state and that he succeeded in making a lasting mark for both our finances and our livability. Oregon is fortunate that Bob Straub took the plunge into politics, and his successes are our legacy.” —Victor G. Atiyeh, Governor of Oregon (1979-1987), from the Foreword