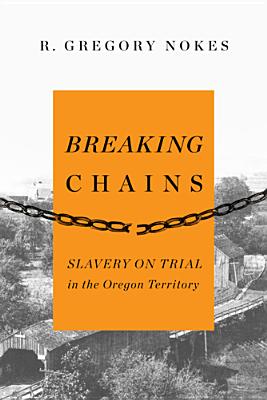 When they were brought to Oregon in 1844, Missouri slaves Robin and Polly Holmes and their children were promised freedom in exchange for helping develop their owner’s Willamette Valley farm. However, Nathaniel Ford, an influential settler and legislator, kept them in bondage until 1850, even then refusing to free their children. Holmes took his former master to court and, in the face of enormous odds, won the case in 1853.

In Breaking Chains, R. Gregory Nokes tells the story of the only slavery case adjudicated in Oregon’s pre-Civil War courts—Holmes v. Ford. Through the lens of this landmark case, Nokes explores the historical context of racism in Oregon and the West, reminding readers that there actually were slaves in Oregon, though relatively few in number.

Drawing on the court record, Nokes offers an intimate account of the relationship between a slave and his master from the slave’s point of view. He also explores the experiences of other slaves in early Oregon, examining attitudes toward race and revealing contradictions in the state’s history. Oregon was the only free state admitted to the union with a voter-approved constitutional clause banning African Americans and, despite the prohibition of slavery in the state, many in Oregon tolerated it and supported politicians who advocated for slavery, including Oregon’s first territorial governor.

Breaking Chains sheds light on a somber part of Oregon’s history, bringing the story of slavery in Oregon to a broader audience. The book will appeal to readers interested in Pacific Northwest history and in the history of slavery in the United States.

R. Gregory Nokes is the author of Massacred for Gold: The Chinese in Hells Canyon, an Oregonian Pacific Northwest “Top 10” book. He travelled the world as a reporter and editor for the Associated Press and The Oregonian. He is a graduate of Willamette University and attended Harvard University as a Nieman Fellow. He and his wife, Candise, live in West Linn, Oregon.