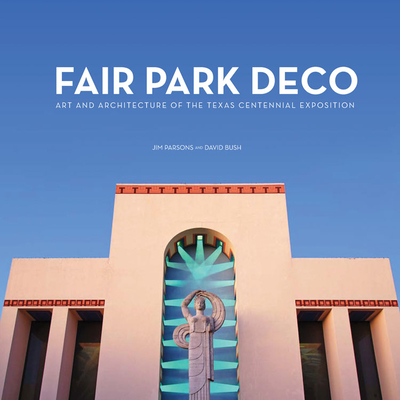 By Jim Parsons, David Bush
$42.00
Special Order -- These books can be hard for us to get

Fair Park Deco is a fascinating tour of the 1936 Texas Centennial Exposition. Like every American exposition in the 1930s, it began in economic depression. Although its economy had been buoyed by major oil discoveries in the early '30s, Texas agriculture was hard hit by the Great Depression. By the middle of the decade, state officials had set their sights on a great centennial celebration to help stimulate the economy and attract tourist dollars. “If during the next six months the people of the state could become filled with the idea of holding a big celebration on the one hundredth anniversary of the establishment of Texas independence,” the state’s centennial commission speculated in July, 1934, “it would have the effect of creating a general forward-looking spirit through the state. It would be more stimulating than anything we can think of, and this effect would be immediate.”

This book focuses specifically on the Art Deco art and architecture of Fair Park—the public spaces, buildings, sculptures and murals that were designed for the 1936 exposition. Most of the chapters in the book represent different areas of Fair Park, with buildings and artwork effectively arranged in the same order that a visitor to the Texas Centennial Exposition might have seen them. The art and architecture are featured in original photography by Jim Parsons and David Bush as well as in historic photographs.

Fair Park is one of the finest collections of Deco architecture in the country, but it is so much more: the embodiment of Texan swagger, it is a testament to the Texanic task of creating a dazzling spectacle in the darkest days of the Depression.

JIM PARSONS is the director of special projects and walking tours chair for Preservation Houston. He also works as a freelance writer, editor, and photographer. DAVID BUSH developed his lifelong interest in historic architecture while growing up in New Orleans. He has worked professionally in preservation since 1990, primarily at Galveston Historical Foundation and Preservation Houston. David Bush and Jim Parsons have coauthored three books together, most recently Hill Country Deco: Modernistic Architecture of Central Texas published by TCU Press in 2010.