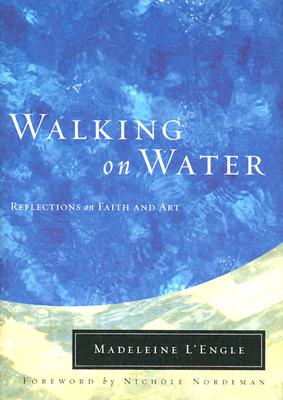 By Madeleine L'Engle
$18.99
Special Order -- These books can be hard for us to get

In this classic book, Madeleine L'Engle addresses the questions, What makes art Christian? What does it mean to be a Christian artist? What is the relationship between faith and art? Through L'Engle's beautiful and insightful essay, readers will find themselves called to what the author views as the prime tasks of an artist: to listen, to remain aware, and to respond to creation through one's own art.

Madeleine L'Engle was the author of more than forty-five books for all ages, among them the beloved A Wrinkle in Time, awarded the Newbery Medal; A Ring of Endless Light, a Newbery Honor Book; A Swiftly Tilting Planet, winner of the American Book Award; and the Austin family series of which Troubling a Star is the fifth book. L'Engle was named the 1998 recipient of the Margaret A. Edwards award, honoring her lifetime contribution in writing for teens. Ms. L'Engle was born in 1918 in New York City. She wrote her first book, The Small Rain, while touring with Eva Le Gallienne in Uncle Harry. She met Hugh Franklin, to whom she was married until his death in 1986, while they were rehearsing The Cherry Orchard, and they were married on tour during a run of The Joyous Season, starring Ethel Barrymore. Ms. L'Engle retired from the stage after her marriage, and the Franklins moved to northwest Connecticut and opened a general store. After a decade in Connecticut, the family returned to New York. After splitting her time between New York City and Connecticut and acting as the librarian and writer-in-residence at the Cathedral of St. John the Divine, Madeleine L'Engle died on September 7, 2007 at the age of 88.

“When I discovered Walking on Water years ago, my creative self underwent a sort of liberation. I had always sensed that there was a wonderful connection between spirituality and creativity, but Madeleine’s insights about both of those worlds helped me claim with more confidence my own creative gifts. This is a wise and inspiring book that should be in every artist’s library.”
–Vinita Hampton Wright, author of Grace at Bender Springs and Velma Still Cooks in Leeway

“Once again, L’Engle touches the deepest parts of our psyche and heart with her artist’s wand. She writes with an earthy rhythm that not only reveals the mysteries of our artistic natures, but also qualifies all along the way her inimitable wise-woman philosophies. L’Engle’ s writing is God’s gift to a generation who needs to sit on a stump and lend an ear to what the right brain is saying to the left and to what the soul is saying to the heart. Walking on Water guides the wandering artist back to the Savior and says ‘There, you’ve come home again where you belong!’”
–Patricia Hickman, award-winning author of Katrina’s Wings

“There are those who write about art-making as if they’ re detailing the techniques of a heart surgeon. Then there are those, like Madeleine L’Engle, who simply show you their heart. Like the words of Jesus to the fisherman brothers, the words of Madeleine are ‘follow me’ words. Through the pages of Walking on Water hungry, thirsty folks have been following for two decades–quickly recognizing that the reason Madeleine is worth following is that she follows Jesus.”
–Charlie Peacock-Ashworth, record producer and author of At the Crossroads: An Insider's Look at Contemporary Christian Music