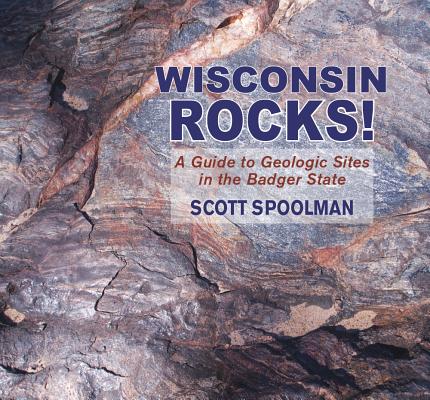 In the early 1800s, fortune-seeking miners in Wisconsin's lead district dug thousands of pits, earning the nickname "badgers" because their excavations resembled the holes dug by the burrowing mammal. Early settlers sought out other natural resources as well, with limestone quarried from the Niagara Escarpment along Lake Michigan, iron mined in the Penokee Range, and copper discovered in glacial deposits, eroded from Midcontinental Rift basalts near Lake Superior. Not only is Wisconsin's geology some of the most diverse of any sate in the country, but much of it is internationally famous. Within the state's borders are enormous potholes eroded by glacial floods, a mysterious meteor impact site, caves with flowstone "painted" by iron and manganese oxides, and Van Hise Rock in the Barabooo Hills, where principles of structural geology were established. Author Scott Spoolman has picked 52 of the best geologic sites in the state to include in Wisconsin Rocks , a new title in the state-by-state Geology Rocks series. Organized into five regions of the state, all of the sites are in publically accessible parks and natural areas. Outdoor enthusiasts will enjoy learning about the rock formations of the state's many glens, gorges, and bluffs. Geology buffs can also explore glacial features along Wisconsin's 1,200-mile-long Ice Age Trail or avoid them altogether in the Driftless Area, a region mysteriously untouched by the massive ice sheets of the Pleistocene Epoch.