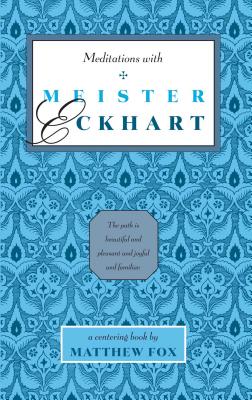 
We can usually get this book in 3 to 7 days, except during a pandemic. We are doing our best
Meister Eckhart was a 13th-century mystic, prophet, feminist, declared heretic, and an early advocate of creation-centered spirituality. This tradition affirms humanity’s potential to act divinely, and it embraces life--living and dying, growing old and sinning, groaning and celebrating--as the creative energy of God in motion. For Eckhart, to be spiritual is to be awake and alive; creation itself was for him the primary sacrament that begins from “the spring of life” or the heart.

Eckhart’s pathway and that of the creation tradition is a simple way. It demands no gurus, no fanciful methods, no protracted exercises or retreats. This is why he called it a “wayless way” that is available to everyone, and why he points out that the person “who has found this way needs no other.”
Matthew Fox was a member of the Dominican Order in good standing for 34 years until he was expelled by former Pope Joseph Ratzinger, who was a cardinal and chief inquisitor at the time. Matthew Fox is the founder of Wisdom University (formerly the University of Creation Spirituality) and the foremost proponent of Creation Spirituality, based on the mystical teachings of early Christian visionaries such as Hildegard von Bingen, Meister Eckhart, and Saint Thomas Aquinas. He is the author of 26 books, including Original Blessing and The Coming of the Cosmic Christ. In 2019, Matthew Fox was cited as one of the "100 Most Spiritually Influential Living People in the World" according to Watkins Mind Body Spirit magazine.