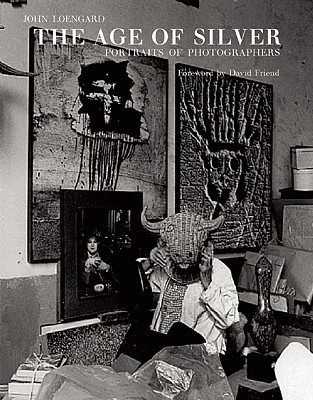 The Age of Silver is a tribute in portraits to the last great generation of photographers working with traditional film.

John Loengard: Born in New York City in 1934, John Loengard is best known for his long association with LIFE magazine, for which he was a freelance photographer for five years before joining the magazine as a staff photographer in 1961. Many of his pictures taken for LIFE, including his photographic essays on "The Shakers" and "Georgia O'Keeffe," are now considered classics. When LIFE suspended weekly publication in 1972, Loengard became picture editor of the semi-annual LIFE Special Reports. He was picture editor of People magazine at its conception in 1973, and was instrumental in the rebirth of LIFE as a monthly in 1978, and served as the magazine's picture editor until 1987. He continued as a contributing photographer for LIFE until 2000, and in 2004 was the fifth person to receive the coveted Henry R. Luce Lifetime Achievement Award from Time, Inc. Since 1987 he has been the author of eight books, and has taught at The International Center for Photography, the New School for Social Research (both in New York City), and at workshops around the country. In 2005, American Photo magazine identified Loengard as "one of the 100 most influential people in photography."

David Friend: David Friend is editor of creative development at Vanity Fair and was the director of photography at Life magazine in the 1990s. A distinguished journalist, Friend is the author of Watching the World Change: The Stories Behind the Images of 9/11 (Farrar, Straus, Giroux, 2006) and was an executive producer of the CBS documentary 9/11, which won Emmy and Peabody Awards. Among many publications, he has edited Vanity Fair's Hollywood (2000), Oscar Night (2004), and Vanity Fair: The Portraits (2008). He is currently at work on a book about the culture wars of the 1990s.