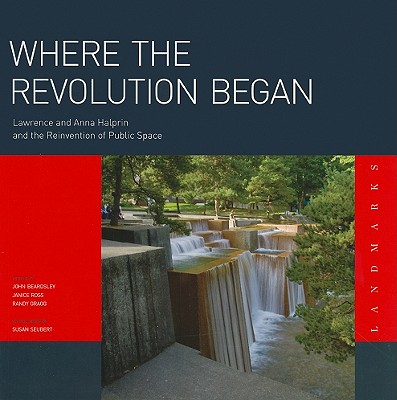 By Randy Gragg (Editor), Susan Seubert (Photographer), John Beardsley (Essay by)
$29.95
On Our Shelves Now as of 24 Hours Ago

Between 1963 and 1970, Lawrence Halprin and Associates realized a quartet of public plazas in Portland, Oregon, that redefined the city and set a bold new precedent for urban landscape architecture. Dubbed the Portland Open Space Sequence and composed of the Lovejoy Fountain, Pettygrove Park, and Forecourt Fountain (later renamed Ira Keller Fountain), plus the lesser known Source Fountain, the plazas were a dynamic collage of striking concrete forms, gushing water, and alpine flora that, in their seamless mix of nature and theater, created a playful metaphorical watershed coursing through the central city. Where the Revolution Began is the story of how these plazas came to be. Born of the creative experimentation and collaboration between Halprin and his wife, pioneering choreographer/ dancer Anna Halprin, the sequence came to life in the unlikely setting of the city's first scrape-and-rebuild urban renewal project. But Halprin defied the conventions of both American urban renewal and midcentury modernism, designing the kind of inviting, exuberant public space not seen seen since Renaissance Rome's Trevi Fountain and Piazza Navonna. For Halprin, the plazas became the first step in a career-long exploration of sequential works of landscape design, from the Haas Promenade in Jerusalem to the Roosevelt Memorial in Washington, D.C. For Portland, Halprin's work marked the beginning of a tradition of remaking the city around interactive public spaces such as the famed Pioneer Courthouse Square. And for landscape architecture, the plazas offer some of the earliest precedents for the ecologically and socially responsive urbanism ascendant today.

Randy Gragg is editor in chief of Portland Spaces magazine and has written on art and architecture for Architectural Record, Metropolis, Preservation, the New York Times Magazine, Harper's, and numerous other publications.