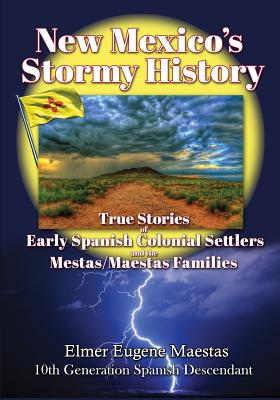 Conquistador General Don Diego de Vargas led hundreds of Spanish pioneers to resettle New Mexico after the 1680 Indian Revolt. This little-known colonial period brought peace and prosperity to settlers and Native Americans in what later became northern New Mexico and parts of surrounding states. Spanish Royalty awarded many faithful soldiers and settlers with grants of land to establish farms, ranches, and ultimately to populate villas that became cities such as Albuquerque, Santa Fe and Taos.

U.S. Navy Master Chief of 30 years, Elmer Eugene Maestas set sail on a serious study of his family's roots after his late brother's trip through Spain years earlier had failed to turn up even one Maestas. Learning his Maestas surname was originally spelled Mestas, Elmer found his ancestors had come from Spain with General de Vargas -- and that he was a 10th generation Spanish descendant whose forefathers had been awarded not one, but two land grants He and his family knew nothing about them and, not much more about New Mexico's "stormy" history.

Could your family have a fascinating history or maybe a land grant or two? Answer these questions:

This book takes you on a trip through the ages in the Land of Enchantment, and reveals the names of many early Spanish settlers and soldiers. Even if you don't discover your land grant (which you might wish you hadn't), you will learn much about the fascinating history of the great state of New Mexico.