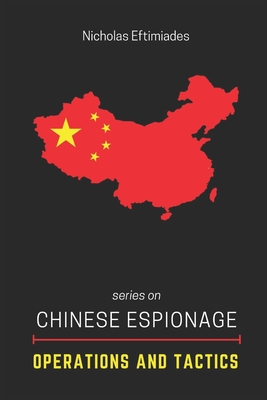 This monograph includes a link and password to a video "A comparative Analysis of China's Economic Espionage Tactics."
Reviews:
This scholarly work is a superb compilation and analysis of the public record concerning the Chinese Communist Party's espionage activities against the rest of the world and the United States in particular. Most important it goes well beyond the "what" has happened and provides insight into the how and why of this activity. The reader should be aware that a noted expert in the field has provide a synthesized review of all the available information. It is a glimpse at what is happening around the world. There are more facts understood by those with appropriate security access and much more is known only to the senior levels of the CCP and its operatives.
-- Richard Haver, former Assistant Secretary of Defense for Intelligence, former DCI Deputy for Community Affairs, and Chief of Staff, National Intelligence Council. A must - read for professionals in Counter intelligence, security and government affairs. The author has crafted the most detailed account ever published on China's espionage operations and tactics...... The USA is loosing its secrets and technology to China's "whole of society" approach ..... Our Nation's need for good counterintelligence has never been greater ......Mr. Eftimiades is the real deal, a veteran of the Intelligence Community who describes the challenges and provides recommendations on how to do a better job in protecting America.
- Nicholas G. Kikis, former Director /Defense Clandestine Service and Chief of East Asia Division. Mr. Eftimiades' monograph is an important contribution to our understanding of how and why the Chinese espionage Tsunami has appeared in every aspect of American life from culture to nuclear weapons. It builds on earlier work by Mr. Eftimiades and others on China's economic and industrial espionage, and exposes the consequences of changes in Chinese law made in 2014 and 2017. These change in law made the conduct of espionage an obligation of citizenship the "must not refuse". By doing so, China has de facto expanded its relatively small cadre of professional intelligence officers by using the power of the State to compel any of its hundreds of thousands of students and businessmen resident outside of China to undertake espionage missions and in doing so, are overwhelming the counterintelligence resources of the US and allied nations.
Dr. William Schneider, former US Undersecretary of State, Arms Control and International Security Affairs. Eftimiades' meticulously documented study shows how China's massive 'whole of society' approach to espionage has created a new paradigm on how intelligence activities are conducted and provides a cautionary tale for the numerous countries it has been directed against.
- June Teufel Dreyer金德芳Professor, Department of Political Science, University of Miami. Know before you buy. This short book is the most detailed work ever published in the unclassified world on China's intelligence tradecraft. It is NOT a causal description of a few cases of Chinese espionage with pictures thrown in for intrigue and excitement. This monograph (50 pages) is a critical analysis of China's current intelligence activities and associated espionage tradecraft. It reviews 595 cases of espionage, economic espionage, covert action, theft of technology and trade secrets. The study identifies and analyzes the specific espionage tradecraft used by China's intelligence services, State Owned Enterprises, universities, private companies, and individuals. This work is for Insider Threat specialists, Intelligence Officers, security professionals, attorneys, policy makers, journalists, and anyone else who needs a detailed understanding of China's espionage operations and tactics.