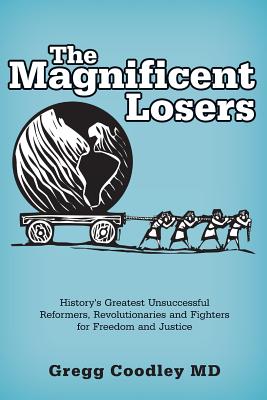 By Gregg Coodley
$16.95
We can usually get this book in 3 to 5 days, except during a pandemic. We are doing our best

The Magnficent Losers tells the stories of twenty great, but unsuccessful reformers and fighters for freedom and justice from the Roman Republic up to the Twentieth Century. The stories of these heroes and heroines sweep from Russia to Nebraska, from Britain to the Phillippines and from the Andes mountains to the boulevards of Paris. Although unsuccessful during their lifetimes, much of what these reformers fought for has come to pass, for they laid the groundwork for future success. The Magnficent Losers include Tiberius and Gaius Gracchi, Boudica, Akiba, Mazdak, John Ball and Wat Tyler, Stenka Razin, Joseph Warren, Tupac Amaru, Wolfe Tome, Toussaint L'Ouverture, Tecumseh, Henry Clay, Louis Kossuth, Oliver Howard, Elizabeth Cady Stanton, Guissepe Garibaldi, Eugene Debs, William Jenning Bryan, Emilio Aguinaldo and Jean Jaures.