The Wicked Problem of Cultural Heritage and Conflict: Military involvement in the protection and devastation of Cultural Property (Paperback) 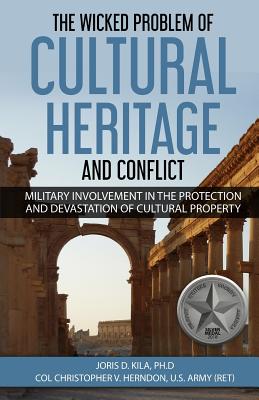 The Wicked Problem of Cultural Heritage and Conflict: Military involvement in the protection and devastation of Cultural Property (Paperback)

The world's cultural heritage is currently not only threatened by time, nature, and human development and also increasingly by armed conflicts. We see destructions caused by looting and illicit traffic but also iconoclasm and manipulations of cultural heritage for political, religious, economic, and propaganda reasons. Revenues derived from the illegal selling are often used to finance conflicts as illustrated in the Da'esh business model example in this publication. Cultural Property Protection (CPP), while legally mandatory under national and international law, are poorly implemented and sanctions are rarely enforced. There is however, a constant and international demand for education and outcomes of multidisciplinary research on the topic, especially in the context of conflict and crime.

Research must include military perspectives, and common mechanisms connected to abuse and protection. Outcomes should contain academic conceptualization, as well as practice based solutions to diminish and mitigate damage. To meet demands while expanding, and following up on their previous work Military Involvement in Cultural Property Protection: An Overview (Joint Force Quarterly, JFQ 74, 3rd Quarter 2014 July 2014) the authors wrote this publication. It contains a selection of field case examples and incorporates recent developments and trends. All ingredients serve to feed research and dialogue about the use and abuse of cultural heritage especially in the event of conflict, with a focus on cooperation and coordination between civil stakeholders and military parties.

A selection of identified fundamental CPP problems is discussed as part of a comparative analysis with field examples such as the Dugong case, an illustration of overlap between cultural and natural heritage coined as hybrid heritage. Other cases include events in Libya, Estonia, Iraq, Syria, Turkey and Mali. All are weighed against Horst Rittel's wicked problems theory and other concepts while involving new notions of securitization, politicization, memorialization and propagandization of cultural property. Last but not least, the authors signal within circles of IO's, NGO's and Governmental parties involved in the management and protection of heritage, an increase of bureaucratic behavior and political use of mankind's cultural heritage contributing to the current deplorable situation.