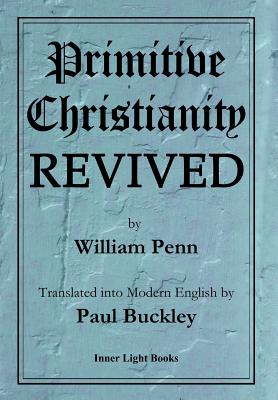 William Penn's classic 1696 work, Primitive Christianity Revived, describes how the ways of the early Christian church as established by Jesus and his apostles had been restored "in the Faith and Practice of the People called Quakers." Central to this short treatise is the Quaker belief in the reality of "the Light of Christ in Man, as the Manifestation of God's Love for Man's Happiness." This doctrine, he wrote, distinguished the Religious Society of Friends from all other Christians, and "as the Fingers shoot out of the Hand, and the Branches from the Body of the Tree; So True Religion, in all the Parts and Articles of it, Springs from this Divine Principle in Man." This book was written by a Christian Quaker to other Christians, and it remains an invaluable resource for twenty-first-century Quakers and Christians.

William Penn outlines in only a few dozen pages the beliefs and behaviors that define the Friends' way of life. The simplicity and precision of Penn's description is unsurpassed in the three centuries since it was first published, but seventeenth-century English vocabulary and grammar have obscured his message. In this new edition, Paul Buckley has translated Primitive Christianity Revived into modern English, revealing the straightforward clarity of Penn's reasoning for a new generation.