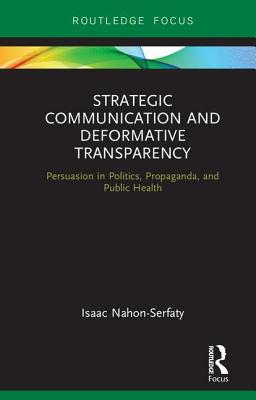 By Isaac Nahon-Serfaty
$81.19
Special Order -- These books can be hard for us to get
(This book cannot be returned, even for store credit.)

This book examines deformative transparency and its different manifestations in political communication, propaganda and public health. The objective is to present the theoretical foundations of deformative transparency, as grotesque and esperpentic transparency, and illustrate the validity of such approach to understand the strategic and ethical implications of the proactive disclosure of the shocking, ugly or outside the norm. Four areas are discussed: political communication with particular focus on populist politicians as the deceased Venezuelan president Hugo Ch vez, the campaign and presidency of Donald Trump, and the tenure in office of the mayor of Toronto, Rob Ford; propaganda strategies of Islamist terrorist organizations such as the Islamic State's escalation of the visually horrific; and public health campaigns that use disturbing images to promote public awareness and eventually influence behavioural change. This study on the transparently grotesque is part of a research program about the economy of emotions in public communication.

Isaac Nahon-Serfaty is Associate Professor and Chair in the Department of Communication at the University of Ottawa, Canada