How the Right Lost Its Mind (Paperback) 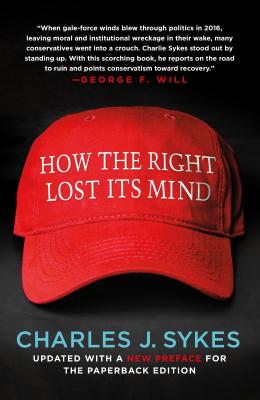 How the Right Lost Its Mind (Paperback)

Once at the center of the American conservative movement, bestselling author and radio host Charles J. Sykes is a fierce opponent of Donald Trump and the right-wing media that enabled his rise.

In How the Right Lost Its Mind, Sykes presents an impassioned, regretful, and deeply thoughtful account of how the American conservative movement came to lose its values. How did a movement that was defined by its belief in limited government, individual liberty, free markets, traditional values, and civility find itself embracing bigotry, political intransigence, demagoguery, and outright falsehood? How the Right Lost Its Mind addresses:
*Why are so many voters so credulous and immune to factual information reported by responsible media?
*Why do conservatives decide to overlook, even embrace, so many of Trump’s outrages, gaffes, conspiracy theories, falsehoods, and smears?
*Can conservatives govern? Or are they content merely to rage?
*How can the right recover its traditional values and persuade a new generation of their worth?

Charles J. Sykes is the author of several books on current affairs and education, including Fail U., A Nation of Victims, and Profscam. He has written pieces for the Wall Street Journal and Time.com among others, and in 2016 was featured for his critiques of Donald Trump and conservative media in articles on the front page of The New York Times, The New York Times Magazine, and NPR. A longtime host of the #1 conservative talk-radio show in Wisconsin, he resigned that position and is now a regular contributor to MSNBC.

“When gale-force winds blew through politics in 2016, leaving moral and institutional wreckage in their wake, many conservatives went into a crouch. Charlie Sykes stood out by standing up. With this scorching book, he reports on the road to ruin and points conservatism toward recovery.” –George F. Will

"An important work. Any serious-minded citizen, no matter of what political persuasion, will benefit from reading it and carefully contemplating the powerful message." - The Washington Times

"Through well thought-out, researched historical analysis, Sykes supports his thesis in engaging fashion for those who search for answers." - Under the Radar

"A dissection of conservatism’s 2016 collapse but also a canny historical analysis." - Commentary

"Sykes...diagnoses problems in the conservative movement that the Right is still very much grappling with. While some of Donald Trump’s Republican political critics now sound no different from the Democrats or even the Resistance (but I repeat myself), Sykes is instead a leader of the loyal opposition." - The Federalist