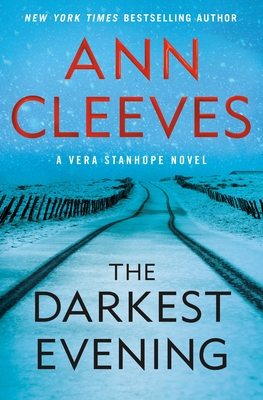 This is book number 9 in the Vera Stanhope series.

From Ann Cleeves—New York Times bestselling and award-winning author of the Vera and Shetland series, both of which are hit TV shows—comes the stunning new Vera Stanhope novel, The Darkest Evening.

"Ann Cleeves is one of my favorite mystery writers."—Louise Penny

On the first snowy night of winter, Detective Inspector Vera Stanhope sets off for her home in the hills. Though the road is familiar, she misses a turning and soon becomes lost and disorientated. A car has skidded off the narrow road in front of her, its door left open, and she stops to help. There is no driver to be seen, so Vera assumes that the owner has gone to find help. But a cry calls her back: a toddler is strapped in the back seat.

Vera takes the child and, driving on, she arrives at a place she knows well. Brockburn is a large, grand house in the wilds of Northumberland, now a little shabby and run down. It’s also where her father, Hector, grew up. Inside, there’s a party in full swing: music, Christmas lights and laughter. Outside, unbeknownst to the revelers, a woman lies dead in the snow.

As the blizzard traps the group deep in the freezing Northumberland countryside, Brockburn begins to give up its secrets, and as Vera digs deeper into her investigation, she also begins to uncover her family’s complicated past.

Shetland and Vera are available on BritBox in the United States. An adaptation of The Long Call, the first book in her Two Rivers series, will premiere on BritBox in 2022.

The first Shetland novel, Raven Black, won the CWA Gold Dagger for best crime novel, and Ann was awarded the CWA Diamond Dagger in 2017. She lives in the United Kingdom.

"Who doesn’t love “large and shabby” Vera Stanhope, the blunt detective in Ann Cleeves’s Northumberland police procedurals? She is already one of the genre immortals."—The New York Times

"Superb . . . This fair-play mystery brims with fully developed suspects and motives that are hidden in plain sight. Skillful misdirection masks the killer’s identity. This page-turner is must reading for fans as well as newcomers."—Publishers Weekly (starred)

"Fans will enjoy matching wits with Cleeves’ eccentric sleuth right up to the dangerous surprise in her denouement."—Kirkus

"Cleeves has a fine time constructing a clockwork murder plot... Loneliness plays both sides of the aisle here, afflicting both Vera and the murderer she hunts."—Booklist

“The Darkest Evening reminds us that the novels are richer, fuller, and more satisfying than any episode of television can be… [Cleeves] is a master of the genre and if anything has gained a step over the years.”—St. Louis Post-Dispatch

“The suspense in this complex, extremely well-written mystery is as mesmerizing as the landscape.”—Free-Lance Star

"Several doors are opened in The Darkest Evening to launch more stories. Devoted fans will keep looking forward to them, while new fans made through this volume will join the crowd."—New York Journal of Books

"To me, this is one of the reads of the year."—Aunt Agatha's

"The Darkest Evening is another page-turner from one of the best in the genre."—Open Letters Review