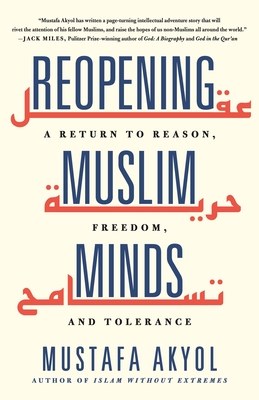 A fascinating journey into Islam's diverse history of ideas, making an argument for an "Islamic Enlightenment" today

In Reopening Muslim Minds, Mustafa Akyol, senior fellow at the Cato Institute and opinion writer for The New York Times, both diagnoses “the crisis of Islam” in the modern world, and offers a way forward. Diving deeply into Islamic theology, and also sharing lessons from his own life story, he reveals how Muslims lost the universalism that made them a great civilization in their earlier centuries. He especially demonstrates how values often associated with Western Enlightenment — freedom, reason, tolerance, and an appreciation of science — had Islamic counterparts, which sadly were cast aside in favor of more dogmatic views, often for political ends.

Elucidating complex ideas with engaging prose and storytelling, Reopening Muslim Minds borrows lost visions from medieval Muslim thinkers such as Ibn Rushd (aka Averroes), to offer a new Muslim worldview on a range of sensitive issues: human rights, equality for women, freedom of religion, or freedom from religion. While frankly acknowledging the problems in the world of Islam today, Akyol offers a clear and hopeful vision for its future.

MUSTAFA AKYOL is a regular contributing opinion writer for The New York Times since 2013, covering matters of Islam in the modern world. His earlier books, Islam without Extremes (2011) and The Islamic Jesus (2017), have been reviewed and praised by The New York Times, The Wall Street Journal, Financial Times, and the Economist. Islam without Extremes was long-listed for the 2012 Lionel Gelber Prize literary prize, while being banned in Malaysia for challenging the “religion police.”

"Much more than an impassioned defense of tolerance and reason, Mustafa Akyol takes his readers on a truly enjoyable and enlightening journey through Islamic theology and law. With brilliant wit and eloquence, Akyol has written a book of undeniable presence and power. This book should be mandatory reading for any serious student of Islam or the Muslim world."
—Dr. Khaled Abou El Fadl, Distinguished Professor of Law, UCLA School of Law, and author of Reasoning with God: Reclaiming Shari ah in the Modern Age.

"Mustafa Akyol has written a page-turning intellectual adventure-story that will rivet the attention of his fellow Muslims, and raise the hopes of us non-Muslims all around the world.”
—Jack Miles, Pulitzer Prize-winning author of God: A Biography and God in the Qur’an

“The lure of rationalism as a touchstone for the interpretation of religion marked a spellbinding period of premodern Muslim intellectual history. Reopening Muslim Minds, both revisits as well as repurposes some of these debates in order to foster a robust conversation as to how Muslim public theology should be conducted in the contemporary world. An accessible, stimulating and thought-provoking work in which Akyol sparks lively conversation.”
—Ebrahim Moosa, Mirza Family Professor of Islamic Thought & Muslim Society, University of Notre Dame and author of What is a Madrasa?

"Mustafa Akyol passionately engages in controversial and timely issues, builds upon a wide range of contemporary scholarship on Islam and expands his well thought arguments by supportive examples and interesting stories. This is a brilliant book."
— Mariam Al-Attar, Lecturer of Arabic heritage and Islamic philosophy at the American University of Sharjah, United Arab Emirates

"For Mustafa Akyol, the Islamic heritage is not to be approached as a sterile museum, but a lively garden which can always and at any time be cultivated anew. He gives pivotal value to the classical knowledge, or ilm, while not shy away from crucial questions of our modernity. He helps his readers to realise how fruitful is the conjoining of horizons of knowledge, culture and philosophy which belong to past and present..“
—Enes Karic, Professor of Qur’anic studies at the Faculty of Islamic Studies, University of Sarajevo

"In this lucid and captivating book Akyol gives us a most compelling and penetrating plea for reform in Islamic thought. A fervent believer in the universality of reason and freedom, he masterfully links the most debated issues in contemporary Muslim societies to their roots in the past. But for Akyol history is not an exercise in itself, it is here to teach a lesson. And the lesson is that there will be no lasting political reform in the Muslim world without a much-awaited theological renewal."
—Martino Diez, associate professor of Arabic, Catholic University of Milan

"The tug-of-war in the three monotheistic traditions between reason and revelation is both ancient and fiercely contested, but perhaps never more so among Muslims. We are in Akyol's debt here for penning such an eye-opening history of minority scholars and movements in Islam who from the beginning called for the greater use of reason in theology and law and promoted pluralism and tolerance. Especially in a day when crowds all over the world spill into the streets crying out for freedom and dignity, this is a must-read for Muslims and non-Muslims alike.”
—David L. Johnston, Affiliate Assistant Professor of Islamic Studies, Fuller Theological Seminary; Author of Muslims and Christians Debate Justice and Love

"This is a hugely important book. Akyol has dared to destroy one taboo after the other. It should be required reading for all Muslims as well as non-Muslims concerned about the deplorable state of the Islamic world today. I recommend it without any hesitation.”
—Murat Çizakça, Professor of Comparative Economic History and Islamic Finance at Marmara University, Istanbul

"This is an alluring book; it is an inviting book; it is a remarkably erudite book about what happened to Muslims as a result of the gradual closing of our minds. An exercise in historical remembering can often be painful, maybe even bitter. But, in Akyol's hands, it becomes a story vast in its scope and compelling in its evocation of the universal values and ethics in our Scripture, religion, history, philosophy, literature, and culture. Instead of lamenting the past, he urges us to use it as a doorway into a possible future. He writes with intuitive intelligence, empathy, and--dare I say it--love and hope. This isn't just an invitation to Muslims to reopen our minds; it is also a testimony to what such a mind can look like."
—Asma Barlas, Professor of Politics (retired), Ithaca College, author of Believing Women in Islam: Unreading Patriarchal Interpretations of the Qur’an

"Mustafa Akyol’s Reopening Muslim Minds provides a well-reasoned, broad reminder of what Islam and its culture have represented over the past 14 centuries to its adherents and those familiar with the faith and its tradition. It is a reminder needed by all, for we do need to find a way to live together rationally, freely, and accepting of one another now and in the immediate future. Akyol’s book is a sure guide for that endeavor."
—Charles E. Butterworth, Emeritus Professor, Department of Government and Politics, University of Maryland

"As the modern West appears to increasingly embrace intolerant nativism and religious bigotry, Mustafa Akyol’s latest publication is a timely and passionate reminder that universal values like tolerance, freedom, and equality constantly need to be nurtured and protected — lest they disappear. He shows insightfully how such values may be extracted from Islam’s foundational texts and storied past, the memory of which has been nearly eclipsed by cataclysmic political events and sectarian strife through time. Akyol makes the compelling case that this moral and intellectual legacy is still available for the asking and remains eminently receptive to a new flowering in the twenty-first century – should the will and the opportunities be there.?"
— Asma Afsaruddin, Professor of Islamic Studies at Indiana University, Bloomington, author of Contemporary Issues in Islam

"A cogent appeal for an Islamic enlightenment based in Islamic values. ... A clarion call to restore long-diminished traditions in Islamic thought."— Kirkus (Starred Review)

"Akyol here traces the development of Islamic philosophical thought and celebrates its rich legacy. ... The text is fluid, the ideas profound, and the book is recommended for any reader." —Booklist (Starred Review)

"Reopening Muslim Minds is a fresh cultural analysis of Islam....Mustafa Akyol’s book is a call not only to prayer but also to reason. It is a work of theological interpretation that affirms human dignity and respect of one another."— Emina Melonic, The Los Angeles Review of Books

"The best book about Islam this year.” — Nidhal Guessoum, Professor of Physics and Astronomy at the American University of Sharjah, UAE; author of Islam's Quantum Question

"This book should be mandatory reading for any serious student of Islam or the Muslim world." —Khaled Abou El Fadl, distinguished professor of law at UCLA School of Law

"Reopening Muslims Minds is brilliant, wonderfully written, and full of big ideas. I also disagree with the main argument, but it challenged and pushed me throughout. If you're interested in the future of Islam, you should definitely read this book."— Shadi Hamid, Senior Fellow at the Brookings Institution, author of Islamic Exceptionalism: How the Struggle Over Islam Is Reshaping the World.


"In Reopening Muslim Minds, Akyol makes accessible to the modern reader the medieval debates of Islamic theology, law, and quranic exegesis, while remaining respectful of the Muslim scholarly tradition, faithfully presenting its arguments and key precepts. The author is not calling for blind adherence to the European Enlightenment but a return to the Islamic rationalism of the Mu’tazili schools. Akyol puts forward a number of theses that will not sit well with the unflinching dogmatists of today, such as his emphasis that epistemological rationalism is neither new nor influenced by European rationalism rather it is a return to the way of earliest generations of Muslim thinkers and titans. For Akyol, rationalism is an original quranic position - unlike the “slavish fideism” of literalists." — Ahab Bdaiwi, University Lecturer in Formative and post-Classical Islamic Thought, Leiden University