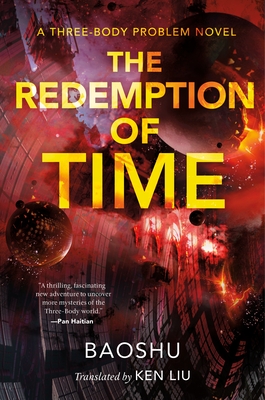 By Baoshu, Ken Liu (Translated by)

Set in the universe of the New York Times bestselling Three-Body Problem trilogy, The Redemption of Time continues Cixin Liu’s multi-award-winning science fiction saga. This original story by Baoshu—published with Liu’s support—envisions the aftermath of the conflict between humanity and the extraterrestrial Trisolarans.

In the midst of an interstellar war, Yun Tianming found himself on the front lines. Riddled with cancer, he chose to end his life, only to find himself flash frozen and launched into space where the Trisolaran First Fleet awaited. Captured and tortured beyond endurance for decades, Yun eventually succumbed to helping the aliens subjugate humanity in order to save Earth from complete destruction.

Granted a healthy clone body by the Trisolarans, Yun has spent his very long life in exile as a traitor to the human race. Nearing the end of his existence at last, he suddenly receives another reprieve—and another regeneration. A consciousness calling itself The Spirit has recruited him to wage battle against an entity that threatens the existence of the entire universe. But Yun refuses to be a pawn again and makes his own plans to save humanity’s future…

Baoshu is a Chinese science fiction and fantasy writer. After receiving his Master of Philosophy in Peking University, Baoshu continued to study at Katholieke Universiteit Leuven and got a second masters there, and finally became a full-time science fiction writer in 2012.

His previous books include What Has Passed Shall in Kinder Light Appear, Garuda, Ruins of Time and Maharoga.

Ken Liu is an award-winning author of speculative fiction. His books include the Dandelion Dynasty series (The Grace of Kings), The Paper Menagerie and Other Stories, The Hidden Girl and Other Stories, and the Star Wars tie-in novel, The Legends of Luke Skywalker. He frequently speaks at conferences and universities on topics like futurism, cryptocurrency, the mathematics of origami, and more. He lives near Boston with his family.

"The Redemption of Time is not a mere derivative of The Three Body Problem, but a thrilling, fascinating new adventure to uncover more mysteries of the Three Body World. " —Pan Haitian

"...bring[s] to mind the creation story in J.R.R. Tolkien's The Silmarillion. The universe-engulfing struggle recalls John C. Wright's astonishing multibook Eschaton saga. And the whole has a transcendental quality that might earn a nod from William Blake." -- Kirkus

"The Redemption of Time reveals that everything becomes a part of a fairy tale in the end; yet, this fairy tale has to carry the ultimate meaning of life and the universe." —Han Song

"A highly imaginative alternate world within the bounds of Liu Cixin's creation.... encapsulates the bountifulness and timeless beauty of the universe." —Liu Waitong