Wolfish: Wolf, Self, and the Stories We Tell About Fear (Hardcover) 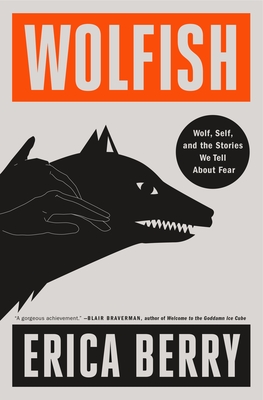 Wolfish: Wolf, Self, and the Stories We Tell About Fear (Hardcover)

For fans of Helen MacDonald’s H is for Hawk and Mary Roach, Erica Berry’s WOLFISH blends science, history, and cultural criticism in a years-long journey to understand our myths about wolves, and track one legendary wolf, OR-7, from the Wallowa Mountains of Oregon

"Wolfish starts with a single wolf and spirals through nuanced investigations of fear, gender, violence, and story. A GORGEOUS achievement." —Blair Braverman, author of Welcome to the Goddamn Ice Cube

“This is one of those stories that begins with a female body. Hers was crumpled, roadside, in the ash-colored slush between asphalt and snowbank.”

So begins Erica Berry’s kaleidoscopic exploration of wolves, both real and symbolic. At the center of this lyrical inquiry is the legendary OR-7, who roams away from his familial pack in northeastern Oregon. While charting OR-7’s record-breaking journey out of the Wallowa Mountains, Erica simultaneously details her own coming-of-age as she moves away from home and wrestles with inherited beliefs about fear, danger, femininity, and the body.

As Erica chronicles her own migration—from crying wolf as a child on her grandfather’s sheep farm to accidentally eating mandrake in Sicily—she searches for new expressions for how to be a brave woman, human, and animal in our warming world. What do stories so long told about wolves tell us about our relationship to fear? How can our society peel back the layers of what scares us? By strategically unspooling the strands of our cultural constructions of predator and prey, and what it means to navigate a world in which we can be both, Erica bridges the gap between human fear and grief through the lens of a wrongfully misunderstood species.

Wolfish is for anybody trying to navigate a world that is often scary. A powerful, timeless, and necessary book for our current and future generations.

Erica Berry is a writer based in her hometown of Portland, Oregon. She has an MFA from the University of Minnesota, where she was a College of Liberal Arts Fellow. Her writing has appeared in The Guardian, The New York Times Magazine, The Yale Review, Outside Magazine, Catapult, The Atlantic, Guernica, and elsewhere. Winner of the Steinberg Essay Prize and the Kurt Brown Prize in Nonfiction, she has received fellowships and funding from the Bread Loaf Writers Conference, Tin House, the Ucross Foundation, the Minnesota State Arts Board, and the Institute for Journalism and Natural Resources. A former Writer-in-Residence with the National Writers Series in Traverse City, Michigan, she is currently a Writer-in-the-Schools with Literary Arts in Portland. Wolfish is her first book.

"[A] wise and arresting debut about the wolves—real and symbolic—that haunt American life. Blending science writing with memoir and cultural criticism, Wolfish is a powerful exploration of predators and their prey delivered with an unflinching and vulnerable honesty.... a necessary environmental memoir: that which acknowledges fear in its ongoing pursuit of hope." —Vulture

"I can't stop talking about Erica Berry's debut Wolfish, a passionate and personal portrayal of the wildness in the world and ourselves. With compelling and lyrical prose that reveals a depth of knowledge and research, Berry looks not just at wolves but the wolf nature in all of us and around us, asking important questions about fear, identity, and our relationship to the natural world. The connections she spins out between world and self are both critical investigations and insightful revelations. Wolfish is a triumph of a debut, cementing Berry as an important new voice.” —Lyz Lenz, author of Belabored and God Land

"Insightful and gorgeously written, Wolfish shows us that the stories we tell about predators and prey are always about more than they seem. This exploration of violence and vulnerability is a book that never stopped surprising me." —Rachel Monroe, author of Savage Appetites: True Stories of Women, Crime, and Obsession

"Wolfish starts with a single wolf and spirals through nuanced investigations of fear, gender, violence, and story. A gorgeous achievement." —Blair Braverman, author of Welcome to the Goddamn Ice Cube: Chasing Fear and Finding Home in the Great White North

“Elegant and elegiac, Wolfish asks how we live alongside, and honor, both the wilds we do such harm to and the fears that run wild within us. Erica Berry beautifully weaves literature, science, philosophy, history, and her own memories to deconstruct millenia of myth-making around wolves, urging a return to something even more powerful than the tales we've spun: untangling the creature from our fear, to better understand both it and ourselves. This is a book composed of what humanity has made, yes, but above all it's a gorgeous reminder that we, too, are part of nature.” —Alex Marzano-Lesnevich, author of The Fact of a Body: A Murder and a Memoir

"Erica Berry's Wolfish is a marvel: a beautiful piece of work as wide-ranging as it is precise. Berry's keen eye and fresh, startling prose are not only an excellent guide to nature and the world around us, but also to what our reactions to the landscape tell us about ourselves—what we fear and who we might become. You won't want to miss this." —V. V. Ganeshananthan, author of Love Marriage, longlisted for the Women’s Prize

“The space between humans and wolves is filled with stories, from fairy tales to family histories to our own fears and desires. With courage and insight, Erica Berry illuminates this tangled territory, inviting us to explore it for ourselves.” —Michelle Nijhuis, author of Beloved Beasts: Fighting For Life in an Age of Extinction