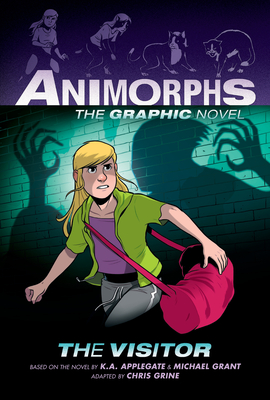 Rachel is still reeling from the news that Earth is secretly under attack by parasitic aliens, the Yeerks. Now she and her friends are the planet's only defense -- five kids who, purely by chance, stumbled onto a downed spacecraft and were given the power to morph into any animals they touch.

The team’s best lead is their assistant principal, Mr. Chapman, who is the human host to a high-ranking Yeerk official. It’s not much, but Rachel’s always been a daredevil, and she volunteers to infiltrate Chapman’s home.

Rachel is tough. She’s fearless. But what she finds inside may be more than even she can handle.

CHRIS GRINE is the creator of the Eisner Award-nomicated Chickenhare and Time Shifters. He’s been making up stories since he was a kid, and not just to get out of trouble with his parents. Nowadays, Chris spends most of his time writing and illustrating books, drinking lots of coffee, and sleeping as little as possible. He spends his free time with his wife, playing with his kids, watching movies, and collecting action figures (but only the bad guys).

K.A. APPLEGATE is the author of the bestselling Animorphs series, as well as the Remnants and Everworld series, Home of the Brave, and the Roscoe Riley Rules series. She lives in Tiburon, California.

Praise for The Invasion (Animorphs Graphix #1):

“Sure to be a hit . . . A strong start to a new graphic novel series for young readers.” -- School Library Journal

“This graphic adaptation of the first book in the long-running Animorphs series . . . brings to life the humor and horror of the original.” -- Booklist

"[The Animorph books] were dark and witty and thrilling, endlessly inventive and achingly sad. They made me laugh out loud and cry myself to sleep. I've been thinking about them for twenty years." -- The Paris Review

"There's clearly something about Animorphs that has kept kids enthralled." -- Publishers Weekly