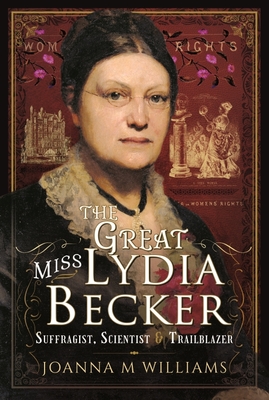 
This book has been declared out of stock indefinitely, so we are unlikely to be able to get it.
Fifty years before women were enfranchised, a legal loophole allowed a thousand women to vote in the general election of 1868. This surprising event occurred due to the feisty and single-minded dedication of Lydia Becker, the acknowledged, though unofficial, leader of the women's suffrage movement in the later 19th century.

Brought up in a middle-class family as the eldest of fifteen children, she broke away from convention, remaining single and entering the sphere of men by engaging in politics. Although it was considered immoral for a woman to speak in public, Lydia addressed innumerable audiences, not only on women's votes, but also on the position of wives, female education and rights at work. She battled grittily to gain academic education for poor girls, and kept countless supporters all over Britain and beyond abreast of the many campaigns for women's rights through her publication, the Women's Suffrage Journal.

Steamrollering her way to Parliament as chief lobbyist for women, she influenced MPs in a way that no woman, and few men, had done before. In the 1860s the idea of women's suffrage was compared in the Commons to persuading dogs to dance; it was dismissed as ridiculous and unnatural. By the time of Lydia's death in 1890 there was an acceptance that the enfranchisement of women would soon happen. The torch was picked up by a woman she had inspired as a teenager, Emmeline Pankhurst, and Lydia's younger colleague on the London committee, Millicent Fawcett. And the rest is history.