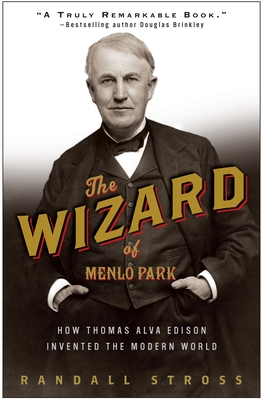 By Randall E. Stross
$17.00
Backordered. There will likely be a delay in getting this book

At the height of his fame Thomas Alva Edison was hailed as “the Napoleon of invention” and blazed in the public imagination as a virtual demigod. Starting with the first public demonstrations of the phonograph in 1878 and extending through the development of incandescent light and the first motion picture cameras, Edison’s name became emblematic of all the wonder and promise of the emerging age of technological marvels.

But as Randall Stross makes clear in this critical biography of the man who is arguably the most globally famous of all Americans, Thomas Edison’s greatest invention may have been his own celebrity. Edison was certainly a technical genius, but Stross excavates the man from layers of myth-making and separates his true achievements from his almost equally colossal failures. How much credit should Edison receive for the various inventions that have popularly been attributed to him—and how many of them resulted from both the inspiration and the perspiration of his rivals and even his own assistants?

This bold reassessment of Edison’s life and career answers this and many other important questions while telling the story of how he came upon his most famous inventions as a young man and spent the remainder of his long life trying to conjure similar success. We also meet his partners and competitors, presidents and entertainers, his close friend Henry Ford, the wives who competed with his work for his attention, and the children who tried to thrive in his shadow—all providing a fuller view of Edison’s life and times than has ever been offered before. The Wizard of Menlo Park reveals not only how Edison worked, but how he managed his own fame, becoming the first great celebrity of the modern age.

RANDALL STROSS is the author of five previous books, including eBoys and Steve Jobs & the Next Big Thing.

“In The Wizard of Menlo Park, [Stross] makes a fascinating and altogether contemporary contribution to our understanding of an iconic American figure.”
–Los Angeles Times

“Randall Stross once again reveals a keen eye for the hidden details and forgotten nuances in the lives of great men. His re-creation of the life and achievements of Thomas Edison will become the standard reference to which all historians will turn for years to come. And yet the book is written with a flair for observation that reads more like a great mystery novel than your standard biography. A must-read!”
–Roderick Kramer, William R. Kimball Professor of Organizational Behavior, Stanford Business School, Stanford University