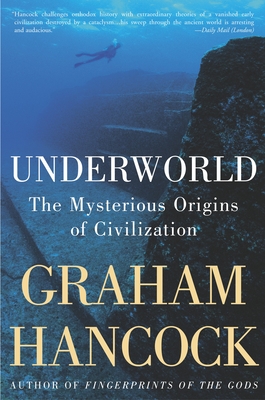 By Graham Hancock
$28.00
We can usually get this book in 3 to 5 days, except during a pandemic. We are doing our best

What secrets lie beneath the deep blue sea? Underworld takes you on a remarkable journey to the bottom of the ocean in a thrilling hunt for ancient ruins that have never been found—until now.

In this explosive new work of archaeological detection, bestselling author and renowned explorer Graham Hancock embarks on a captivating underwater voyage to find the ruins of a mythical lost civilization hidden for thousands of years beneath the world’s oceans. Guided by cutting-edge science, innovative computer-mapping techniques, and the latest archaeological scholarship, Hancock examines the mystery at the end of the last Ice Age and delivers astonishing revelations that challenge our long-held views about the existence of a sunken universe built on the ocean floor.

Filled with exhilarating accounts of his own participation in dives off the coast of Japan, as well as in the Mediterranean, the Atlantic, and the Arabian Sea, we watch as Hancock discovers underwater ruins exactly where the ancient myths say they should be—submerged kingdoms that archaeologists never thought existed. You will be captivated by Underworld, a provocative book that is both a compelling piece of hard evidence for a fascinating forgotten episode in human history and a completely new explanation for the origins of civilization as we know it.

Graham Hancock is the author of a number of bestselling investigations of historical mysteries. These include The Sign and the Seal, The Message of the Sphinx, Fingerprints of the Gods, Heaven’s Mirror, and The Mars Mystery. His books have been translated into twenty languages and have sold more than four million copies around the world. He lives in Devon, England.

“Graham Hancock is no stranger to controversy. The former journalist, whose books have sold five million copies in the past 10 years, has repeatedly dared to challenge scientific shibboleth, taking a run at entrenched thinking in archeology, geology and astronomy.” -- The Globe and Mail