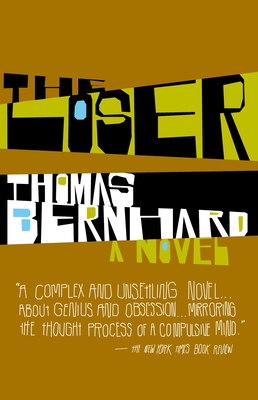 Thomas Bernhard was one of the most original writers of the twentieth century. His formal innovation ranks with Beckett and Kafka, his outrageously cantankerous voice recalls Dostoevsky, but his gift for lacerating, lyrical, provocative prose is incomparably his own.One of Bernhard's most acclaimed novels, The Loser centers on a fictional relationship between piano virtuoso Glenn Gould and two of his fellow students who feel compelled to renounce their musical ambitions in the face of Gould's incomparable genius. One commits suicide, while the other-- the obsessive, witty, and self-mocking narrator-- has retreated into obscurity. Written as a monologue in one remarkable unbroken paragraph, The Loser is a brilliant meditation on success, failure, genius, and fame.

THOMAS BERNHARD was born in Holland in 1931 and grew up in Austria. He studied music at the Akademie Mozarteum in Salzburg. In 1957 he began a second career, as a playwright, poet, and novelist. The winner of the three most distinguished and coveted literary prizes awarded in Germany, he has become one of the most widely translated and admired writers of his generation. His novels published in English include Gargoyles, The Lime Works, Correction, Concrete, Woodcutters, and Wittgenstein's Nephew; a number of his plays have been produced off Broadway, at the Tyrone Guthrie Theatre in Minneapolis, and at theaters in London and throughout Europe. The five segments of his memoir were published in one volume, Gathering Evidence, in 1985. Thomas Bernhard died in 1989.

“A complex and unsettling novel . . . about genius and obsession . . . mirroring the thought process of a compulsive mind.” —The New York Times Book Review“Bernhard writes like a sacred monster. . . . He is a remarkable literary performer: a man who goes to extremes in ways that vivify our sense of human possibilities, however destructive.” — The Wall Street Journal“Bernhard is one of the masters of contemporary European fiction . . . After Kafka’s and Canetti’s, his sensibility is one of the most acute, the most capable of exemplary images and gestures, in modern literature.” — George Steiner